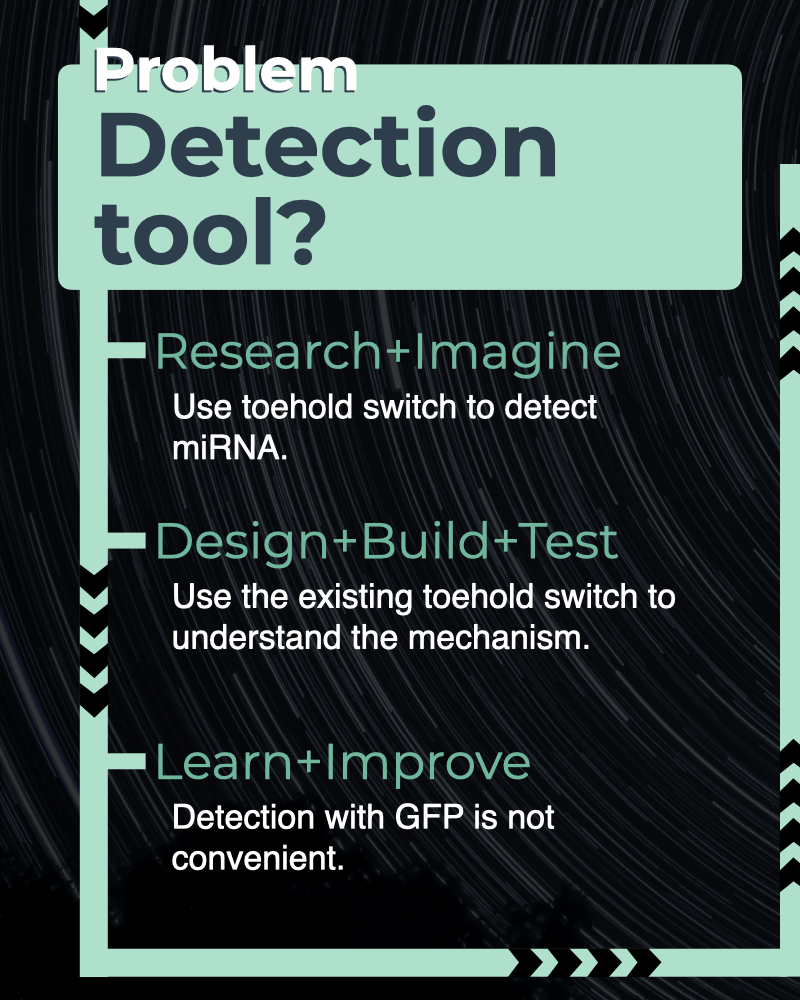 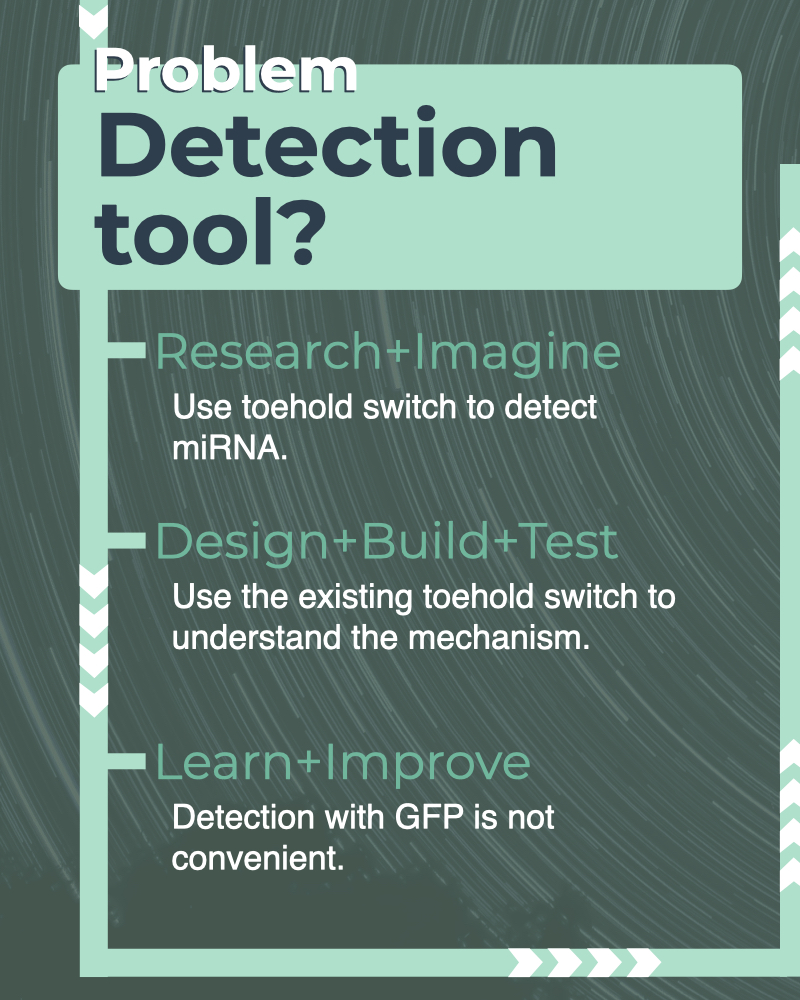 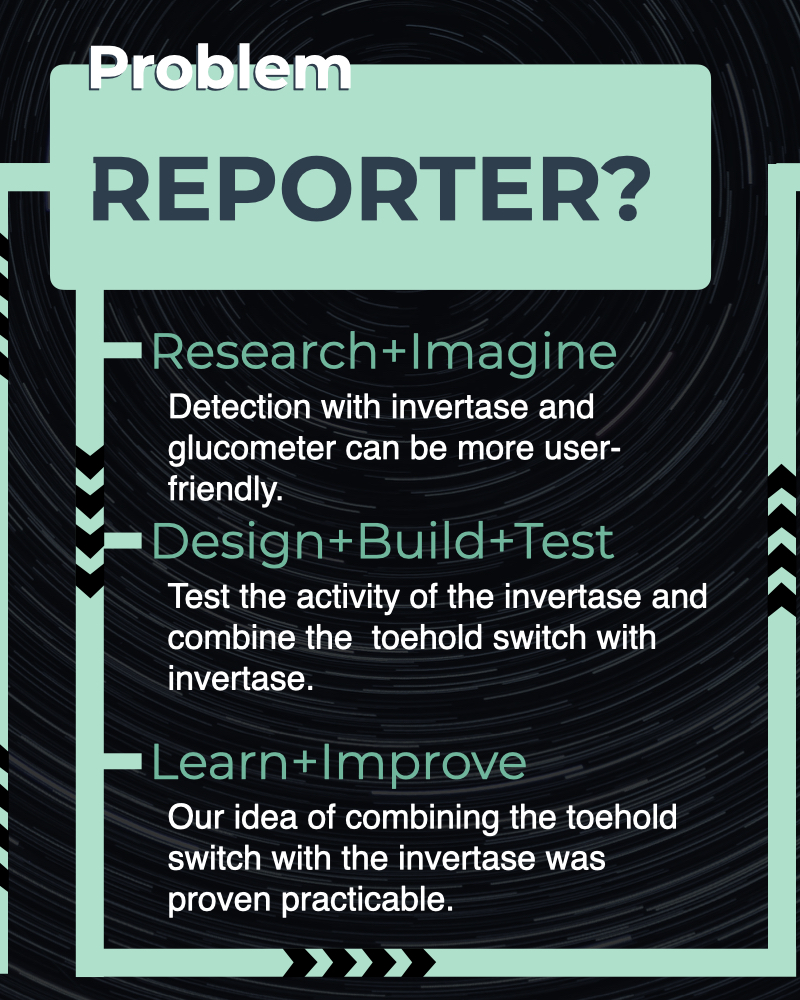 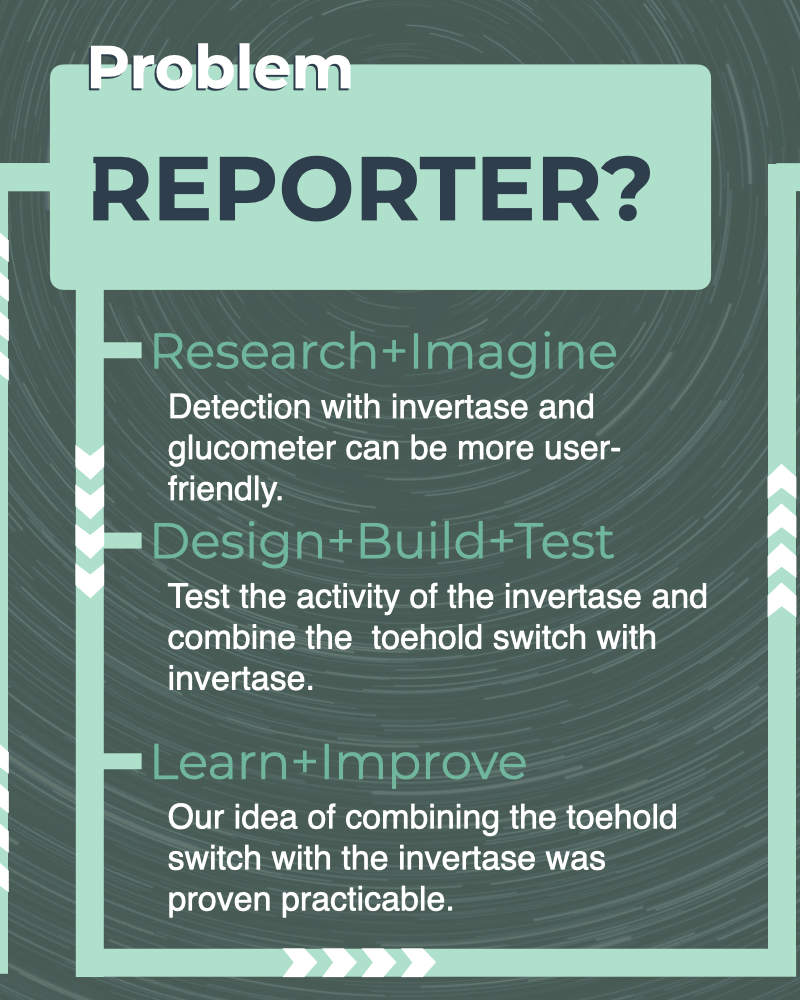 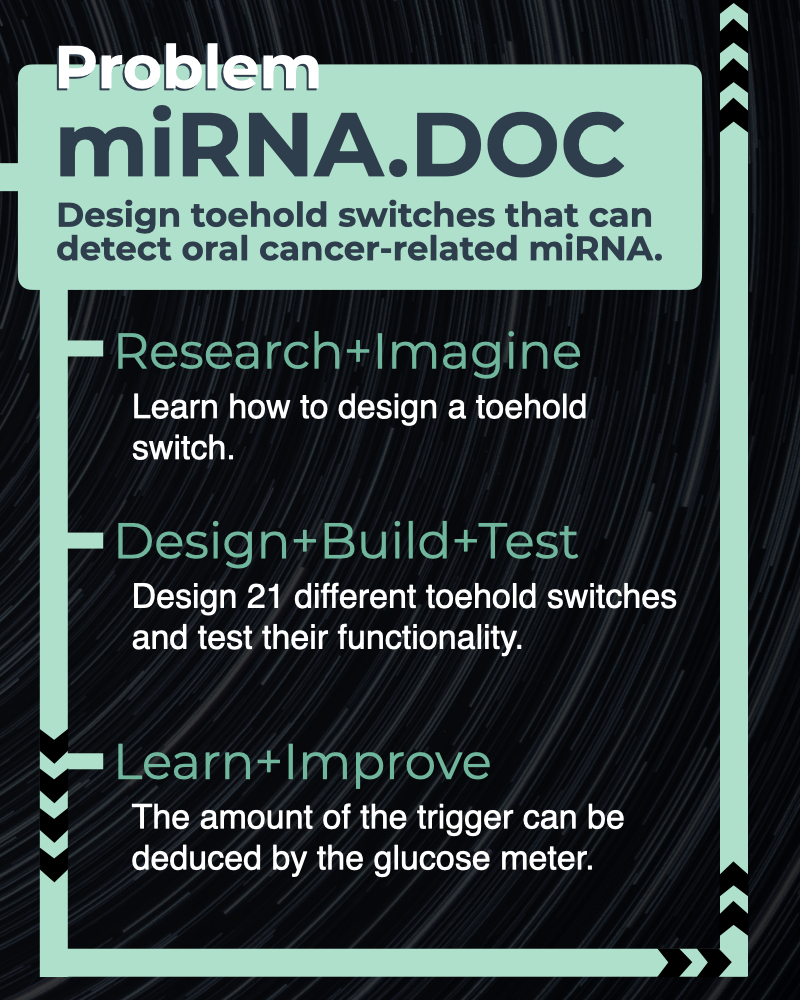 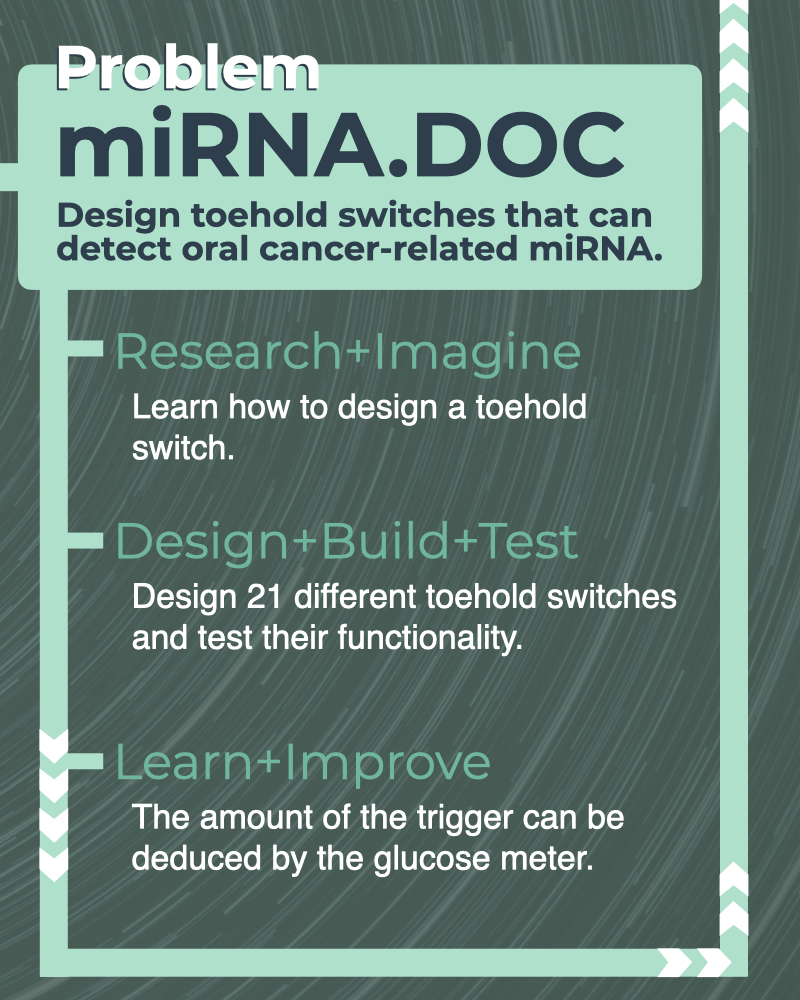 For the sake of decreasing the mortality rate and saving medical resources, we aim to improve the current diagnosis procedure of oral cancer. In our project, we dedicate to develop a non-invasive, accessible, and quantitative system for oral cancer detection.

Our team aim to design a modular device for oral cancer detection, and hope that it can have the following features:

the sample collection and the detection procedure should not involve the introduction of instruments into the body.
the tool can be easily conducted by the general public.
the device can provide quantitative data for more precise and objective detection.


Therefore, we thought about finding a biomarker that can be precisely measured and provide quantitative data for oral cancer. Salivary miRNA can be a perfect biomarker for our project.1, 2, 3, 4 Firstly, the miRNA expression has a significant difference between OSCC (oral squamous cell carcinoma) and control tissues. For instance, miR-21, miR-31, and miR-146 are proven to be upregulated in OSCC.1 Secondly, several OSCC-related miRNAs are secreted in saliva5 , making them very useful for non-invasive clinical applications.

To measure the salivary miRNAs, we adopt a systematic ribocomputing devices, toehold switch.6, 7 According to the research, a toehold switch is a secondary structure RNA with a hairpin loop that can regulate translation. Only with the specific RNA trigger can its structure be opened and start the translation of the following reporter.

Based on the research, We used toehold switches as our biosensors, designing a device that can detect oral cancer-related miRNAs as well as generate measurable signals. 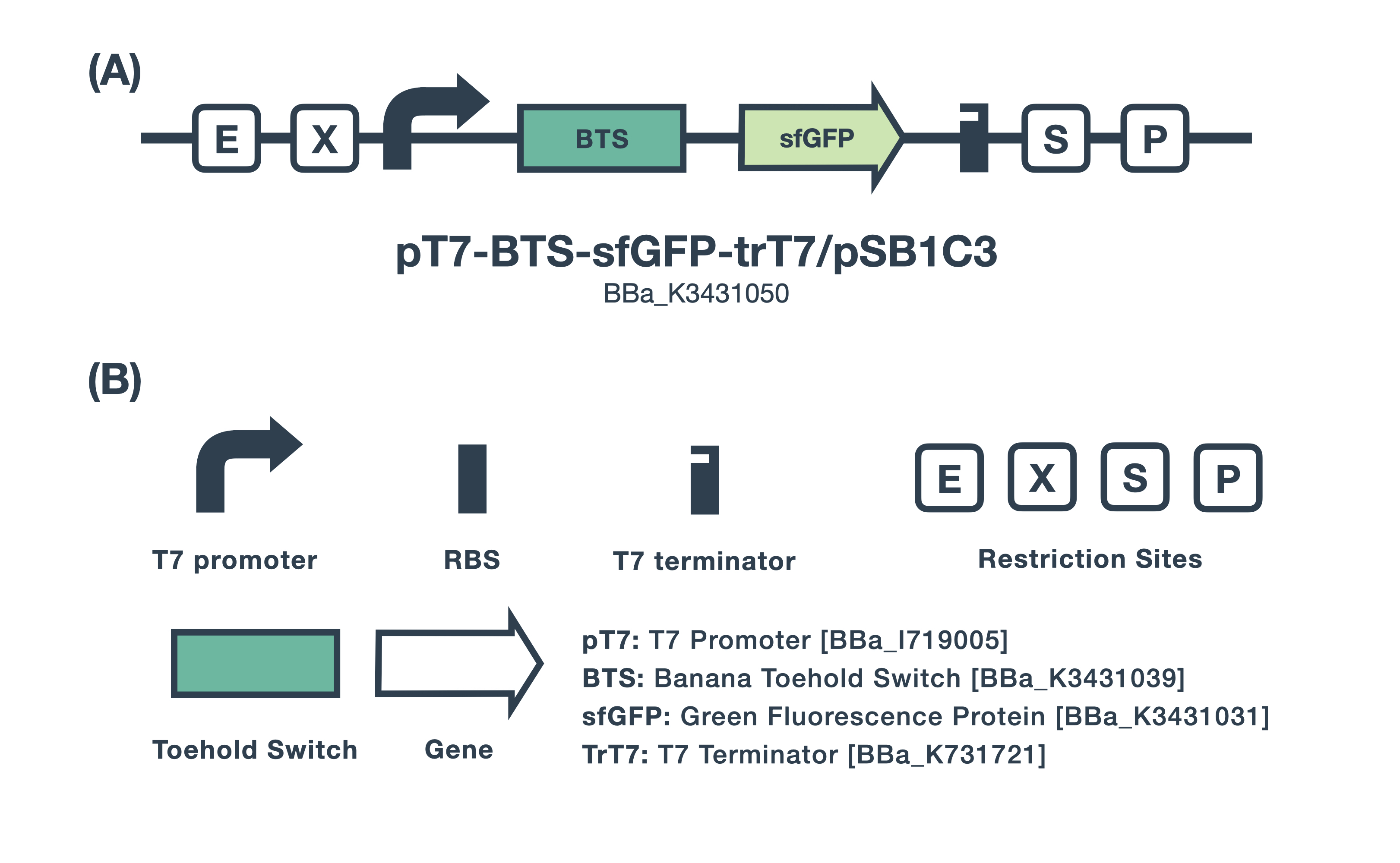 To produce reporter proteins in a cell-free system, we used the PURExpress® In Vitro Protein Synthesis Kit (New England Biolabs). The kit is comprised of two kinds of reagents: A solution contains tRNA and small components such as amino acids and rNTP, and B solution contains ribosomes and protein components such as T7 RNA polymerase, amino-acyl synthetase, or energy regeneration enzyme. In short, they provide all necessary components needed for in vitro transcription and translation, which are purified from E. coli. Besides the basic components in the kit, the RNase inhibitor (1:40, NEB Murine RNAse Inhibitor or Thermofisher Ribolock) is also recommended to be added, as it can considerably enhance protein production. All the reagents required are listed below (Tab.1). To see the detailed protocol and our experimental adjustment, check the Protocol and Measurement .

We carried out a functionality test of banana toehold switch sfGFP, measuring the real-time fluorescence of GFP within the 80 minutes protein production process. The result is shown below. 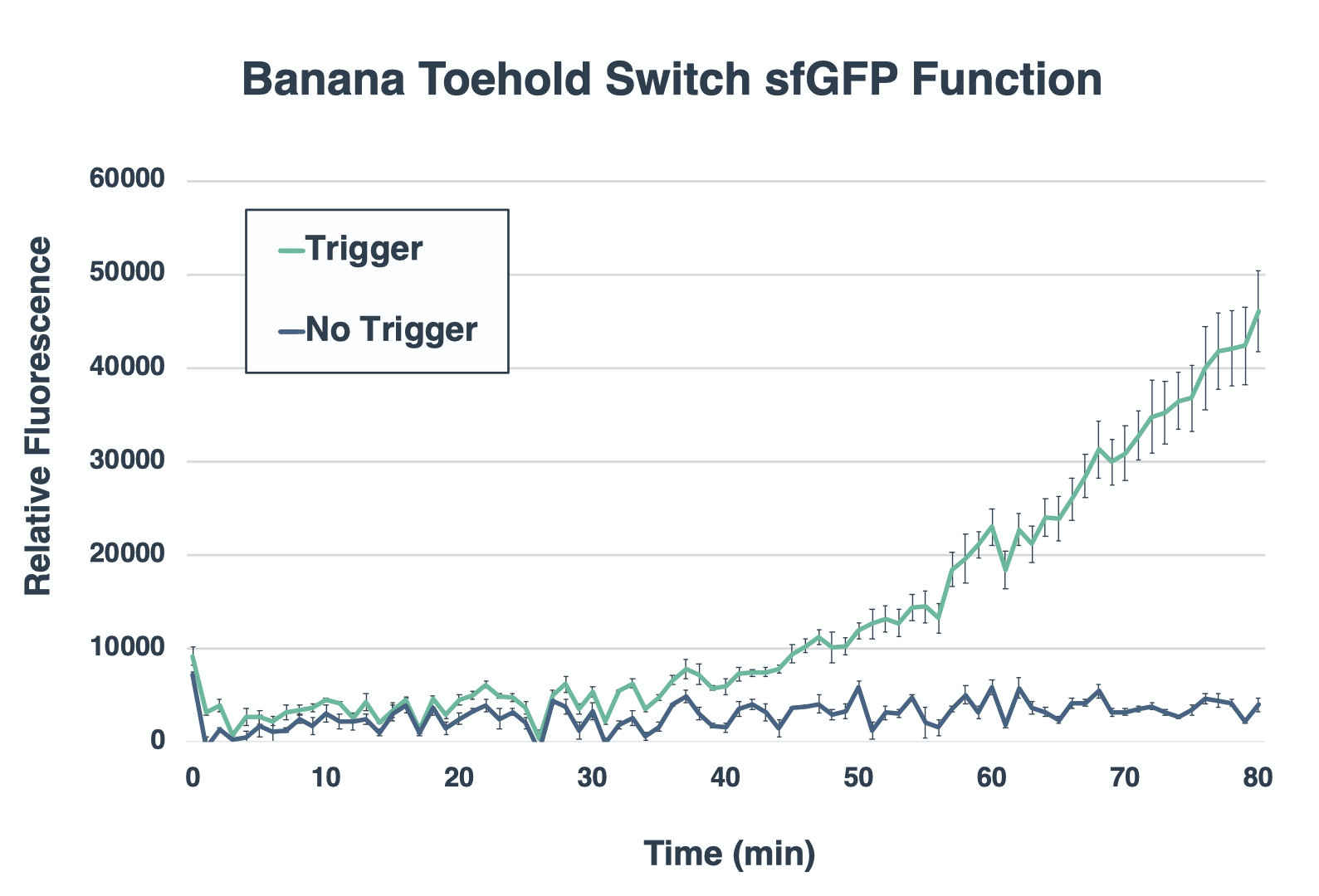 
As seen, the sfGFPs would be highly expressed when the banana triggers existed, while they would be inhibited when there was no trigger in the environment. This suggested the regulatory function of the toehold switch.

From the experiment, we understood the basic mechanism of the toehold switch and identified the most optimal condition for testing toehold switches, which would be repeatedly used in our further experiments. However, we also realized that the process of GFP detection is too inconvenient for the general public, as it requires a plate reader or a spectrometer. As a result, we wanted to replace the sfGFP with another reporter that could be easily measured by anyone.

To remove the equipment limitation on our detection tool, we did some paper research to find out the best reporter protein for our project. Invertase, also called β-D-fructofuranosidase, is an enzyme for the hydrolysis of sucrose into glucose and fructose. It is commonly used as reporter proteins since its product, glucose, can be easily detected with a personal glucose meter (PGM),9 which has a high utilization rate in the public. According to the previous research, Thermotoga maritima Invertase (invertase from Thermotoga maritima) (TmINV) has been proven to have high activity and thermo-stability compared to the commonly used commercial yeast invertase.10 Thus, we chose it to be our reporter protein.

We used both models and experiments to test the activity of invertase. For the modeling, we used MATLAB to create a model for kinetic investigations of the enzymatic reactions. To see the detailed modeling result, please check the Model. As for the wet lab experiments, we produced the invertase with the PURExpress protein synthesis kit. Then we measured its reaction velocity under different sucrose concentrations. The invertase enzymatic reaction was executed at 55℃, which is the best activity temperature for commercial yeast invertase commonly used in PGM-based reaction.9, 10 The result of the model and the experiment is shown below. (Fig.4). 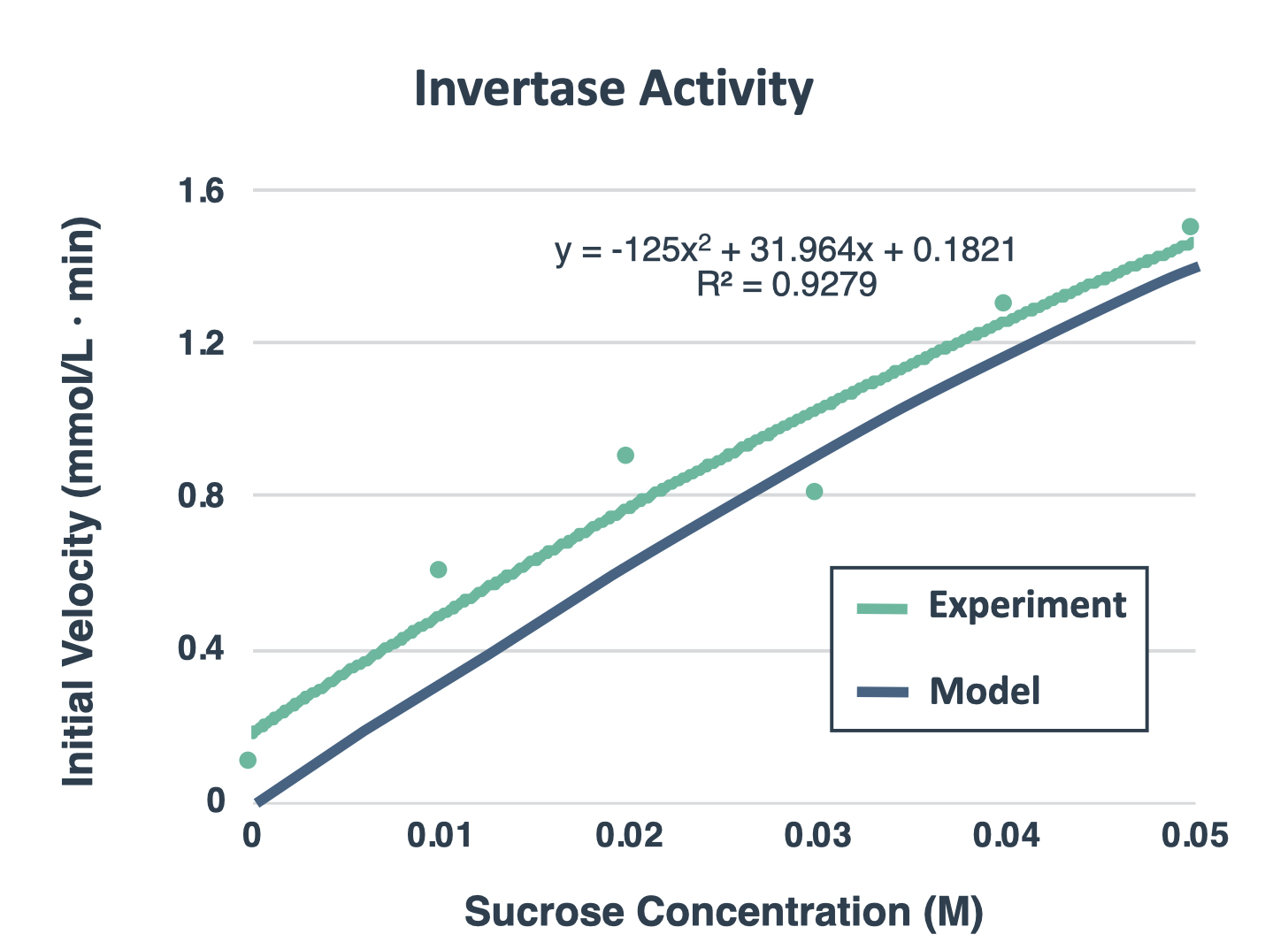 The initial velocity of the reaction increases as the concentration of the substrate, sucrose, rises. The trend of experimental data fitted our model.

As for the banana toehold switch invertase test, the experimental method is quite similar to the previous ones. The plasmids would be transcribed and translated with the protein synthesis kit at 37℃ for 2 hours, and in this experiment, we would then add 5μl of 0.5M sucrose and measured the glucose concentration with the glucose meter (Bionime Rightest™ GM550) every 10 minutes at 55℃ for an hour.

The goal of our project is to construct the toehold switches that can detect the oral cancer-related miRNAs, and express the invertase. Therefore, how to design a toehold switch is an important issue for us.

According to the research about toehold switch,6, 7, 11, 12, 13, 14 there are several basic principles for sequence design:


Besides the paper research, we also consulted with Alexander A. Green, an expert on the toehold switch technology. He recommended us to use the conserved loop sequence in his recent paper,15 and he also explained different kinds of modeling methods for us. To see the detailed content, check the Human Practice.

We adopted two kinds of models to help us design the sequences of the toehold switches. One is NUPACK analysis, which can predict the MFE (minimum free energy) RNA structure at 37℃ and the free energy of the secondary structure. Another one is Vienna binding, which can predict the total free energy of binding and the opening energy for different positions in the sequence. To see the detailed model results, check the Model.

For each kind of oral cancer-related miRNA, we have designed several toehold switches to detect it. With a series of experiments, we could select the best one for each miRNA and further tested its functionality. Here are our selection criteria for toehold switch:


We used the same experimental method as the above banana toehold switch invertase test. The plasmids were transcribed and translated with the PURExpress® In Vitro Protein Synthesis Kit (New England Biolabs) at 37℃ for 2 hours. We would then add 5μl of 0.5M sucrose, and measured the glucose concentration with Bionime Rightest™ GM550 glucose meter after 30 minutes of enzymatic reaction time. 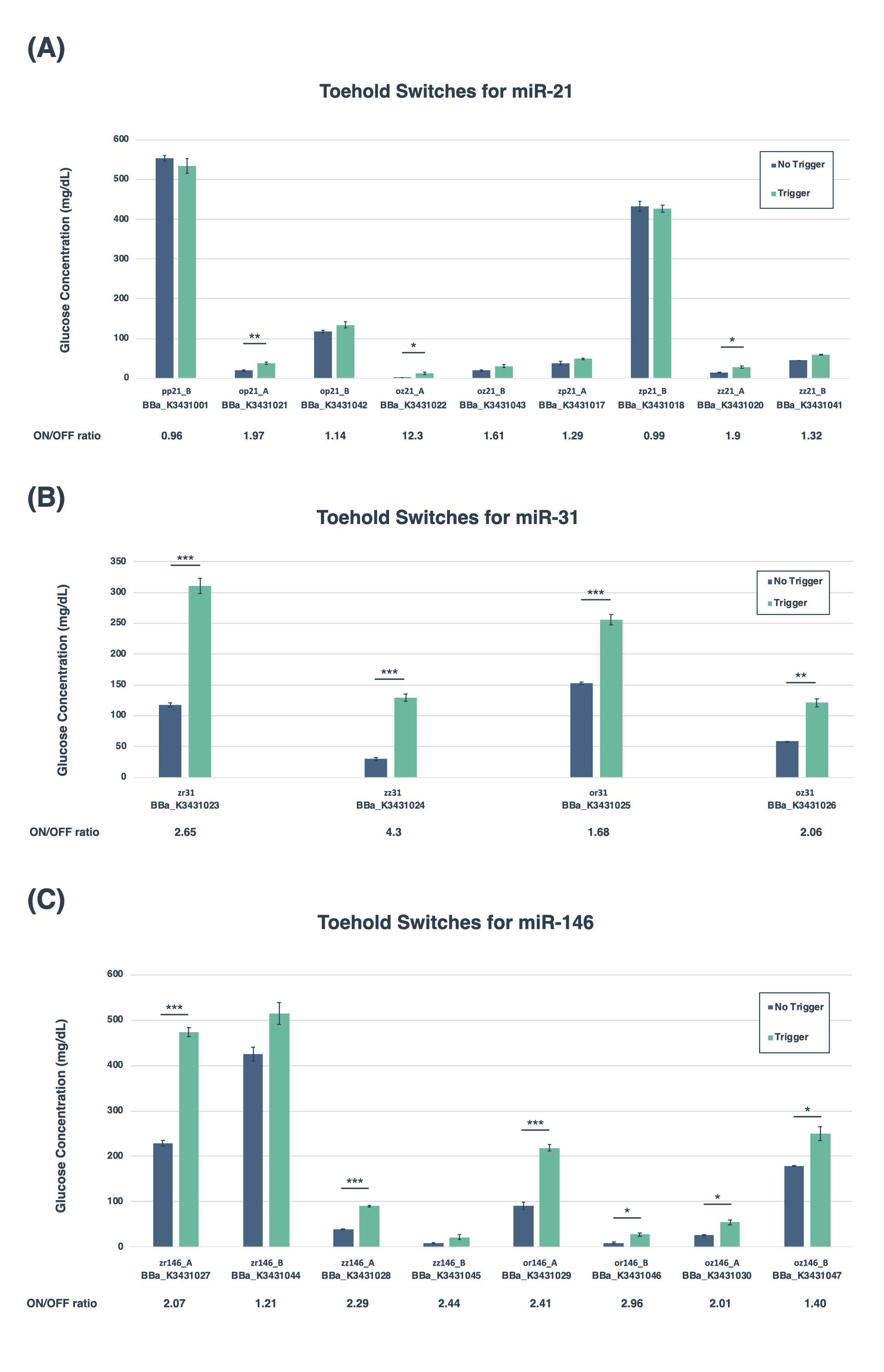 We used miR-191 and miR-233 for our negative selection, which are highly expressed in saliva3, to see whether our toehold switches would be accidentally turned on by the unrelated miRNA. 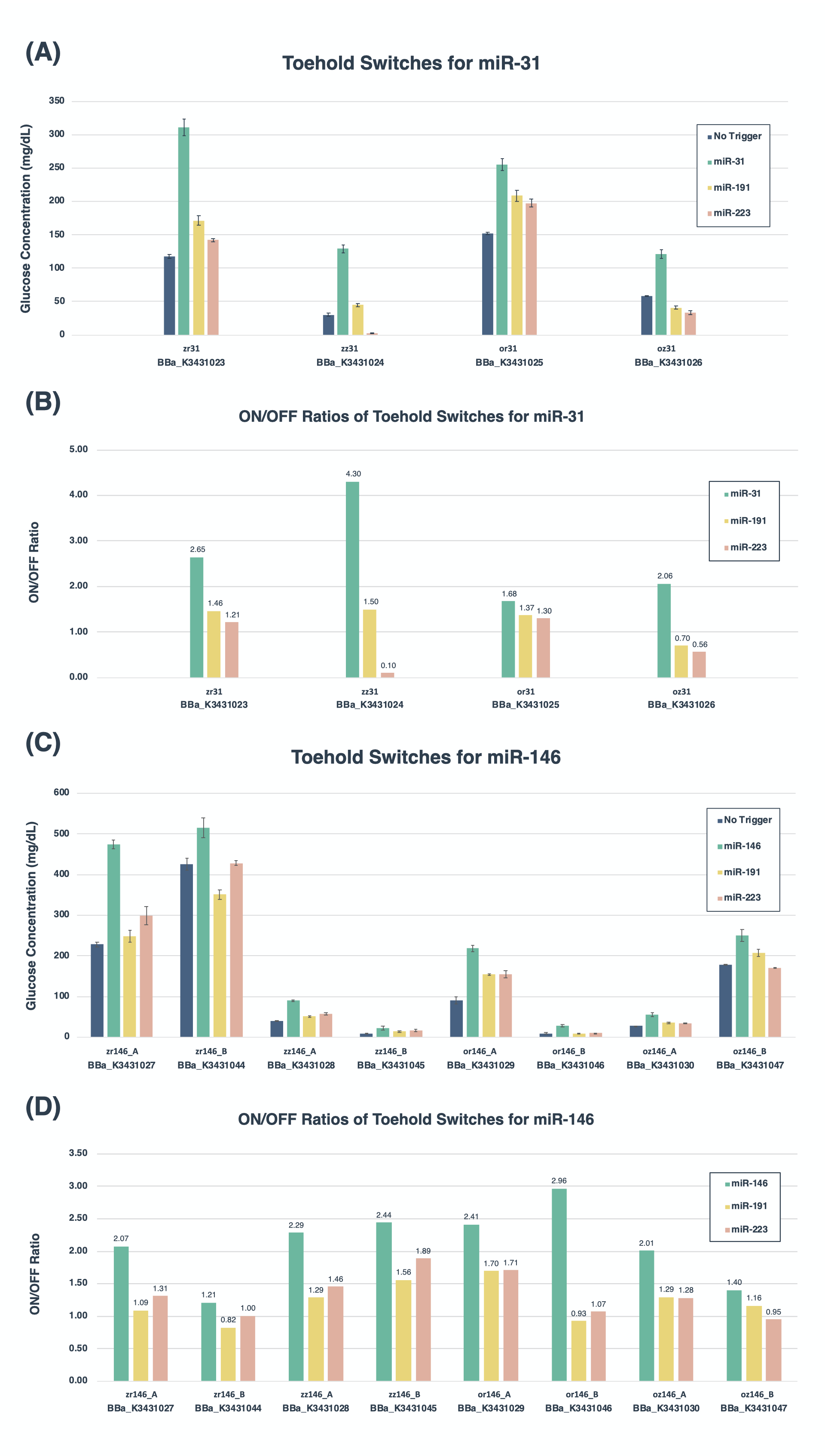 As shown in Fig. 8, most toehold switches have high specificity, as their ON/OFF ratios of the non-related miRNAs, miR-191 and miR-223, were close to 1.

In conclusion, most of the toehold switches had great functionality. The results indicated that we successfully developed a new invertase toehold switch system to detect miRNAs.

After a systematic evaluation with ON/OFF ratio, sensitivity, and specificity, we found that zr31 BBa_K3431023 and zr146_A BBa_K3431027 are the best toehold switches for miR-31 and miR-146 detection. Therefore, we decided to conduct a further examination on these two toehold switches. We measured the glucose concentration under different amount of the miRNA trigger.

As shown above, the glucose concentration rises as the triggers increase, suggesting the positive correlation. With the regression curve formulas, we can measure the amount of the miRNA from the glucose meter readouts.

For future work, we are planning to use our toehold switches to measure the miRNAs in the real saliva. With the comprehensive experiments and the data analysis, we can build a model for oral cancer. Understanding the correlation between the possibility of oral cancer, the amount of salivary miRNA, the invertase expression, and glucose production will help us develop a quantitative system for oral cancer detection.