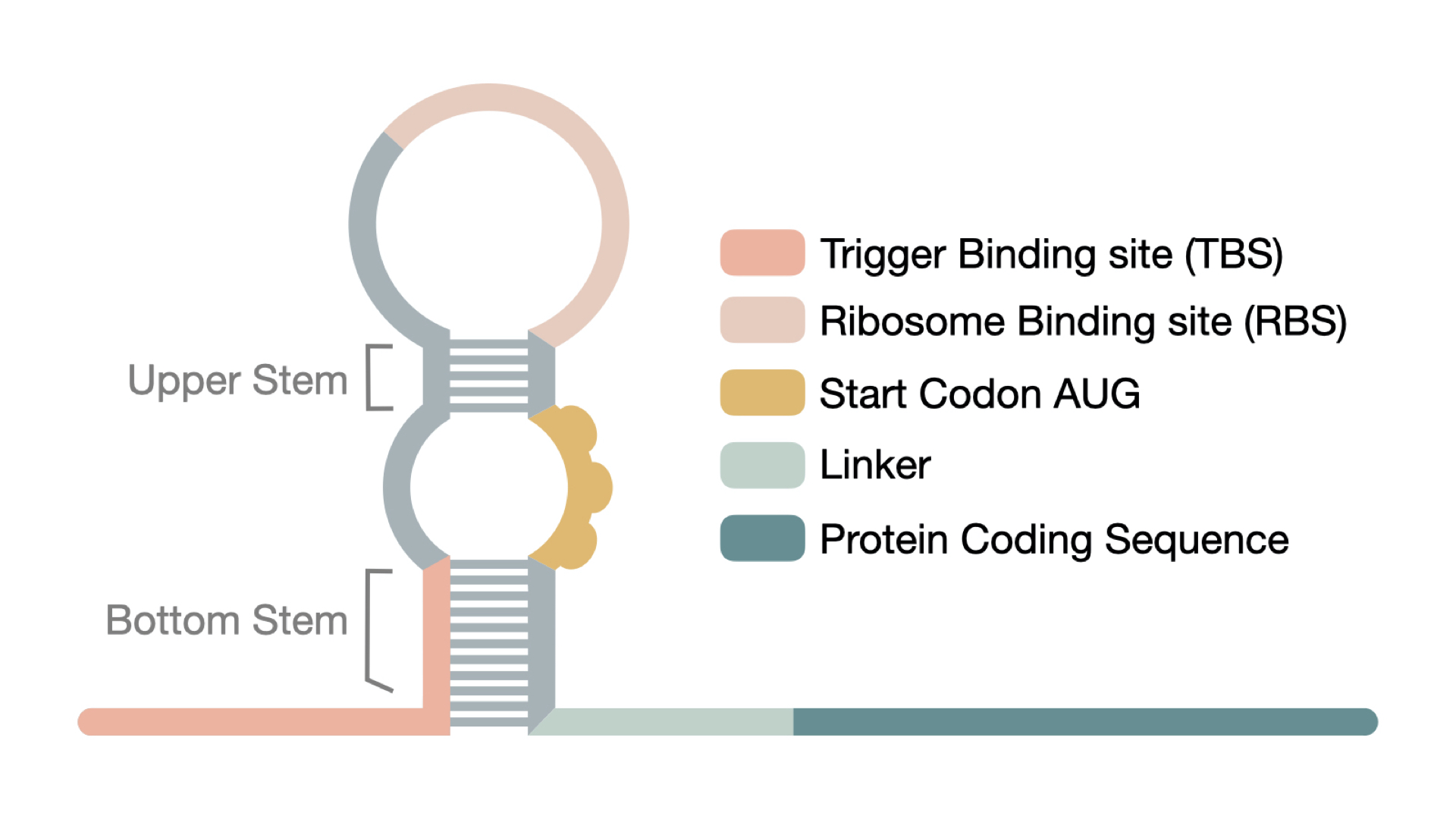 As we can see from the figure above, a toehold switch is composed of serveral different compartments:

Trigger Binding Site (TBS): This is the site where the desired target binds to. Generally, it is complementary to approximately 30 nucleotides from the target RNA3.

Ribosome Binding Site (RBS): This is where the ribosome binds and allows for the start of translating RNA into proteins. It is usually rich in AG for bacteria.

Protein Coding Sequence: This is the region where we can insert the reporter protein. This allows us to detect the presence or quantify the amount of targets presence in the sample indirectly. This is usually a fluorescent protein such as Green Fluorescent Protein.

For an animated verison on the functionality of a toehold switch, please check out our promotion video on our home page.

Due to the limitation of the length for miRNA only having 21-23 nucleotides, the trigger binding site (TBS) was solely designed upon reverse translating the sequence. For instance,

To form the bottom stem of the toehold switch, we reverse complemented 11 nucleotides after the start condon (underlined in the table above) to bind with the TBS sequence.

For the loop structure, it should form a stable hairpin loop structure to avoid expression of the downstream reporter protein in the absence of the trigger RNA. We looked at one of Green’s papers2 for our choice of design. In the paper, he designed two seperate loop structures and tested their effects on the ON/OFF ratio (a ratio is calculated by the expression of reporter protein in the presence and absence of the trigger) for the toehold switches. One of the designs, termed the A series, modified the original toehold switch3 in which the size of the loop domain was reduced from 18 nts to 11 nts. The reduce in length discourages loop-mediated docking of the ribosome which led to reduced leakage in the OFF state. The other design, termed the B series, uses a 12-nt loop and incorporates a more thermodynamically stable upper stem to prevent the leakage problem with the toehold switch. We have adopted the B series design from Green to generate our toehold switch and named it Zika loop. In addition, we adopted a loop design from the original toehold switch as our control group and called it Old loop. For miRNA 21, we kept the loop structure from Wang et al. (2019)1 and named it Paper loop.

The linker’s main purpose is to minimize the interference between the domains of toehold switch and the reporter protein when they form secondary structures. When designing the linker, we were looking for minimal bond formation between the linker and the TBS to prevent unwanted secondary structures. The linker design was an adaptation of the linker from Wang et al. (2019)1 and through randomization of linkers and testing out the thermostability and secondary structure formations with NUPACK. Thus, we named the linker designed this way "Random linker". Besides, we also kept the linker from the toehold switch for ZIKA virus (2016)2 and Wang et al. (2019)1. Their names and abbreviations are shown in the table bellow.

The assembly of different TBS, loops, linkers and their toehold code names are listed in the following tables.

Take one of our design, zr31, as an example. We ran NUPACK to ensure the spontaneous formation of the secondary structure at 37 degrees Celsius, which is -22 kcal/mol. Another factor to consider while designing a toehold switch is to minimize the secondary structure formation from the upper stem all the way to the linker (red part shown in the sequence) of the design as this region is for the beginning of translation for ribosomes. Therefore, we need the RNA to remain single-stranded. In order to achieve that, the closer we can get the free energy to 0 while designing the sequence for the linker and loop structure, the more protein will be transcribed. 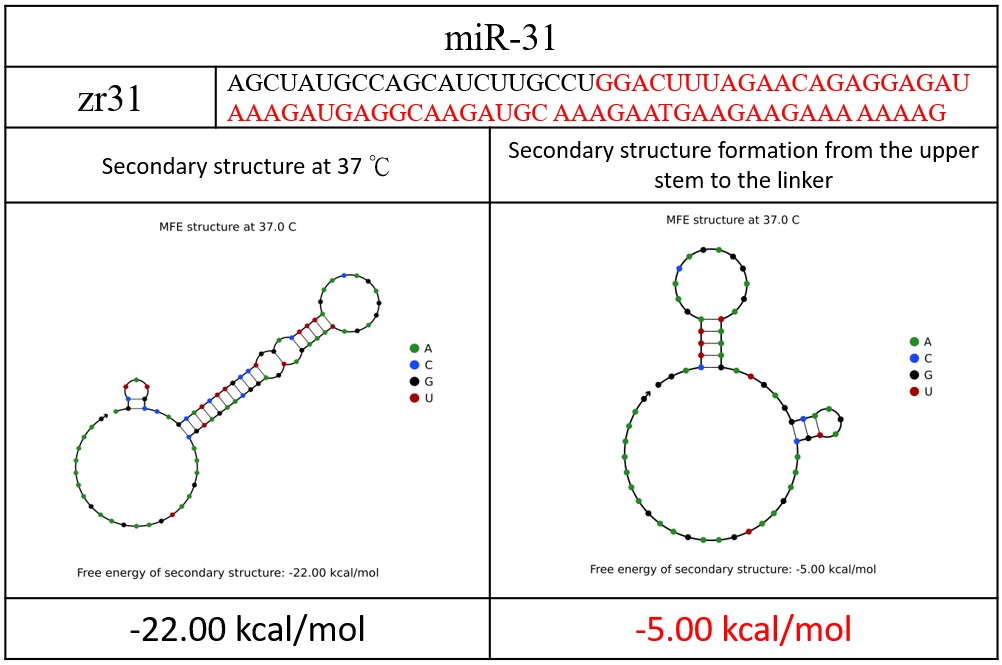 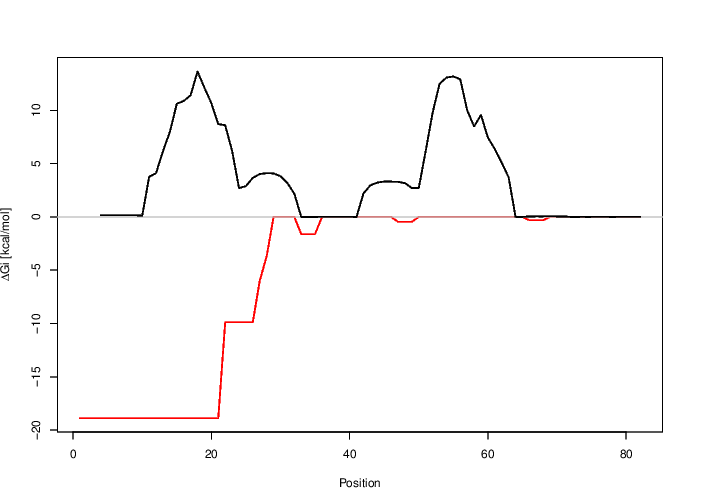 CLICK HERE for all results from NUPACK and Vienna RNA pack for all our sequences!

We started with a simple model of the Michaelis-Menten mechanism based on Keramat et al (2015) 4 to model the enzyme activity for the invertase we used in our experiment. The low substrate concentrations (Equation 1 and 2), which the Vm is calculated from the equation one above based on previous data from Keramat et al (2015) 4, and the substrate inhibition model for high concentrations of substrate (Equation 1, 3 and 4) were both used in the determination of the enzyme activity.


As we can see from above the velocity rapidly accelerates as the concentration of the initial sucrose increases, but then it slowly reaches a maximum and eventually starts to decrease. The apparent decrease in reaction rate is caused by the folding of sucrose molecules from the intramolecular hydrogen bonds which is characterized by Mathlouthi et al (1998)5. From the paper, we were able to determine the inhibiting effect from the substrate reaching saturation using equation 5 and 6 which is known as the aggregation effect. The aggregation effect from the sucrose molecules can be considered using the Ks value calculated from equation 6.


After considering the Ks value from equation 6, we are able to combine it with equation 2 to form the following equation:

However, according to Keramat et al (2015)4, there are still several weaknesses in this model as it does not match their experimental data.4


However, this model still has a low accuracy for the initial time lag at the beginning of the reaction. This is considered for the enzyme sites of sucrose molecules to become available. 4 This was deduced by adding in a initial time lag facter (1-e^(-Ka * t)) which results in our final model:

This model is capable of predicting the reaction rate at the beginning and also at the remaining reaction pathway which includes the initial time lag and irreversible enzyme deactivation through the remaining pathway. More importantly, Keramat et al. (2015)4 have confirmed the similarity in this model and in their experimental data. Therefore, this can be a great model for kinetic investigations of the enzymatic reactions and act as good conformity when compared to our experimental data. 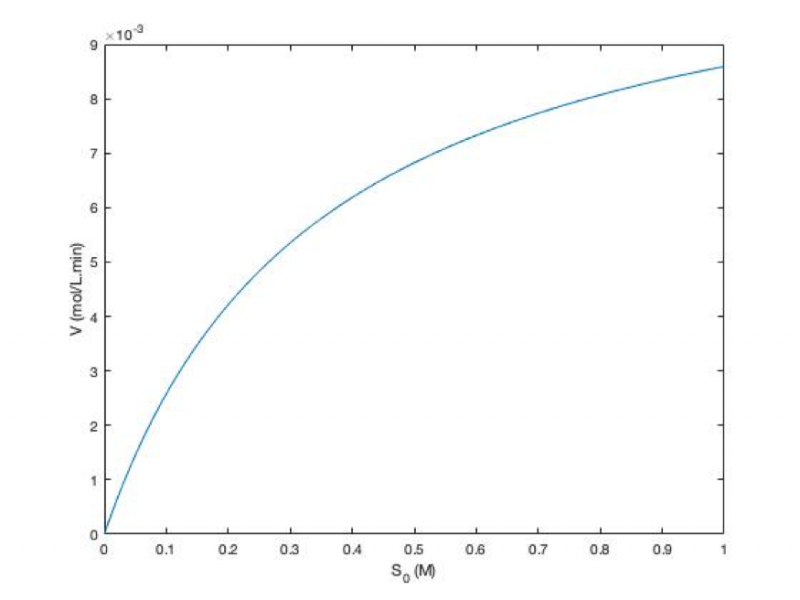 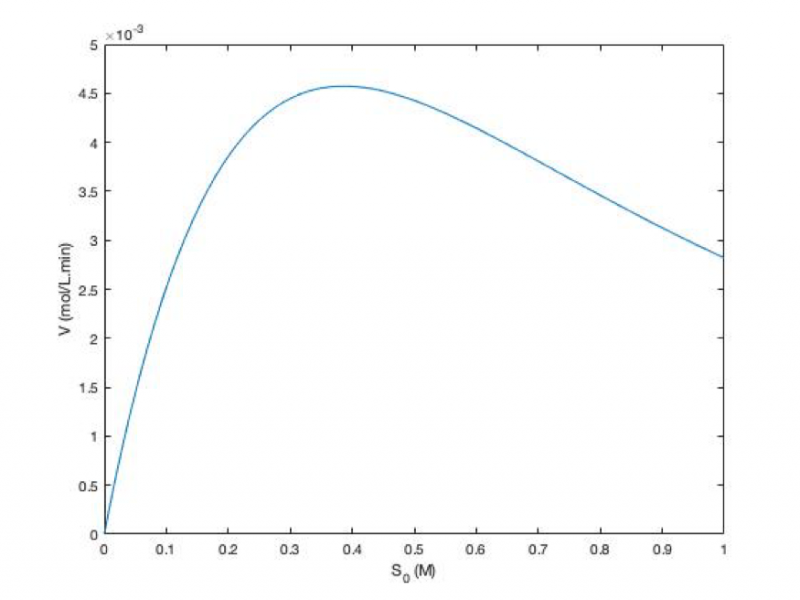 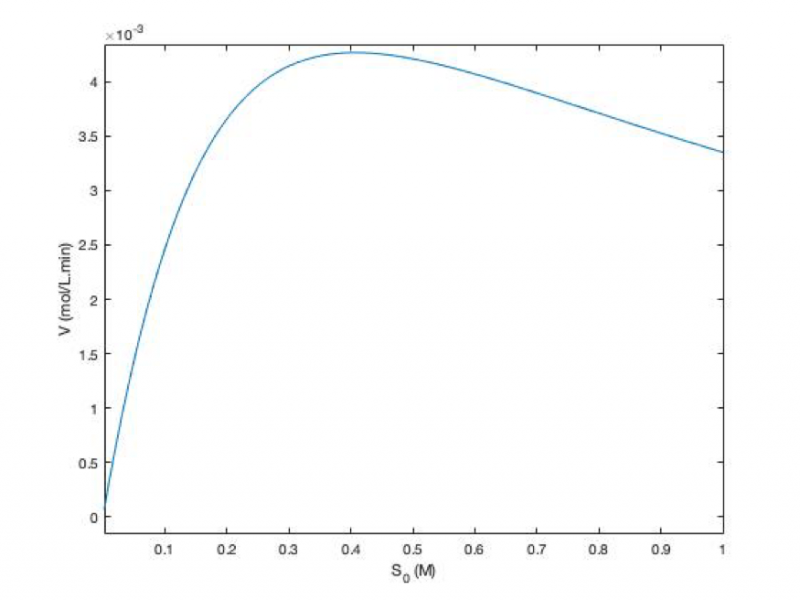 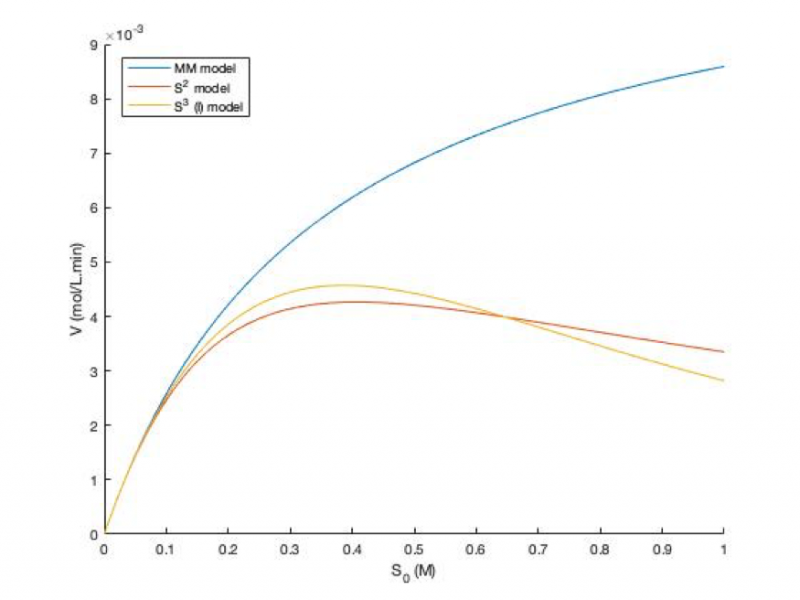 Figure 4. A comparison between the predicted invertase reaction rate using the all three model.