As a leading global cause of preventable blindness and mortality, vitamin A deficiency (VAD) is a serious health problem, particularly in developing regions. Oviita aims to equip these vulnerable regions with a sustainable and community-based solution to VAD. Our solution uses a food-safe strain of Yarrowia lipolytica modified to produce beta-carotene, a Vitamin A precursor. By engineering this yeast to produce cellulase enzymes, VAD communities can grow it as their own vitamin A supplement using readily-available plant matter as feedstock. To facilitate community integration, we designed bioreactor schematics based on locally-available resources, and made the yeast auxotrophic to ensure safe growth with no environmental risk. We also created a Vitamin A biosensor to improve VAD testing, and included an anthelmintic agent in the yeast to combat poor intestinal health. Through these solutions, Oviita aims to be a sustainable and community-based adjunct to global efforts against VAD.

Introduction
An estimated 250 million children worldwide are currently suffering from Vitamin A deficiency (WHO, 2020). Vitamin A deficiency (VAD) is one of the leading causes of preventable childhood mortality, also causing reproductive issues, reduced immune function, vision loss, and in severe cases, blindness. VAD disproportionately harms some of the world’s most vulnerable populations, particularly pregnant women and children in Southeast Asia and Sub-Saharan Africa. 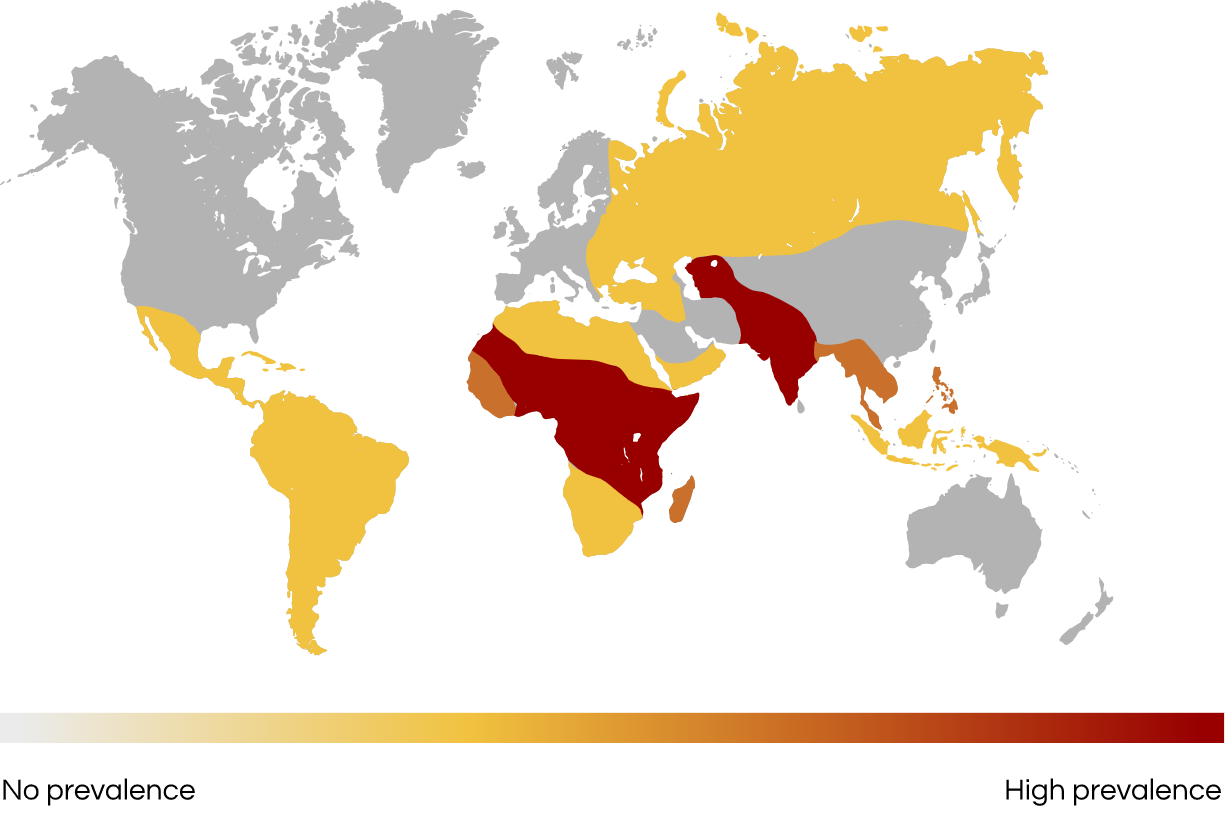 Figure 1. Prevalence of vitamin A deficiency around the globe.


VAD is perpetuated in communities for three main reasons:


Oviita has six main sub-projects to address these three issues and provide a holistic and comprehensive solution to VAD.

Figure 3. Oviita pipeline - a schematic representation of the different subprojects designed to address each of the three perpetuators of VAD.

Beta-carotene, a precursor to Vitamin A, is a molecule that can be used to meet the body’s Vitamin A needs. Unlike Vitamin A, beta-carotene has no lethal dose, and is therefore completely safe for consumption.

Graciously sent to us by
Dr. Rodrigo Ledesma-Amaro 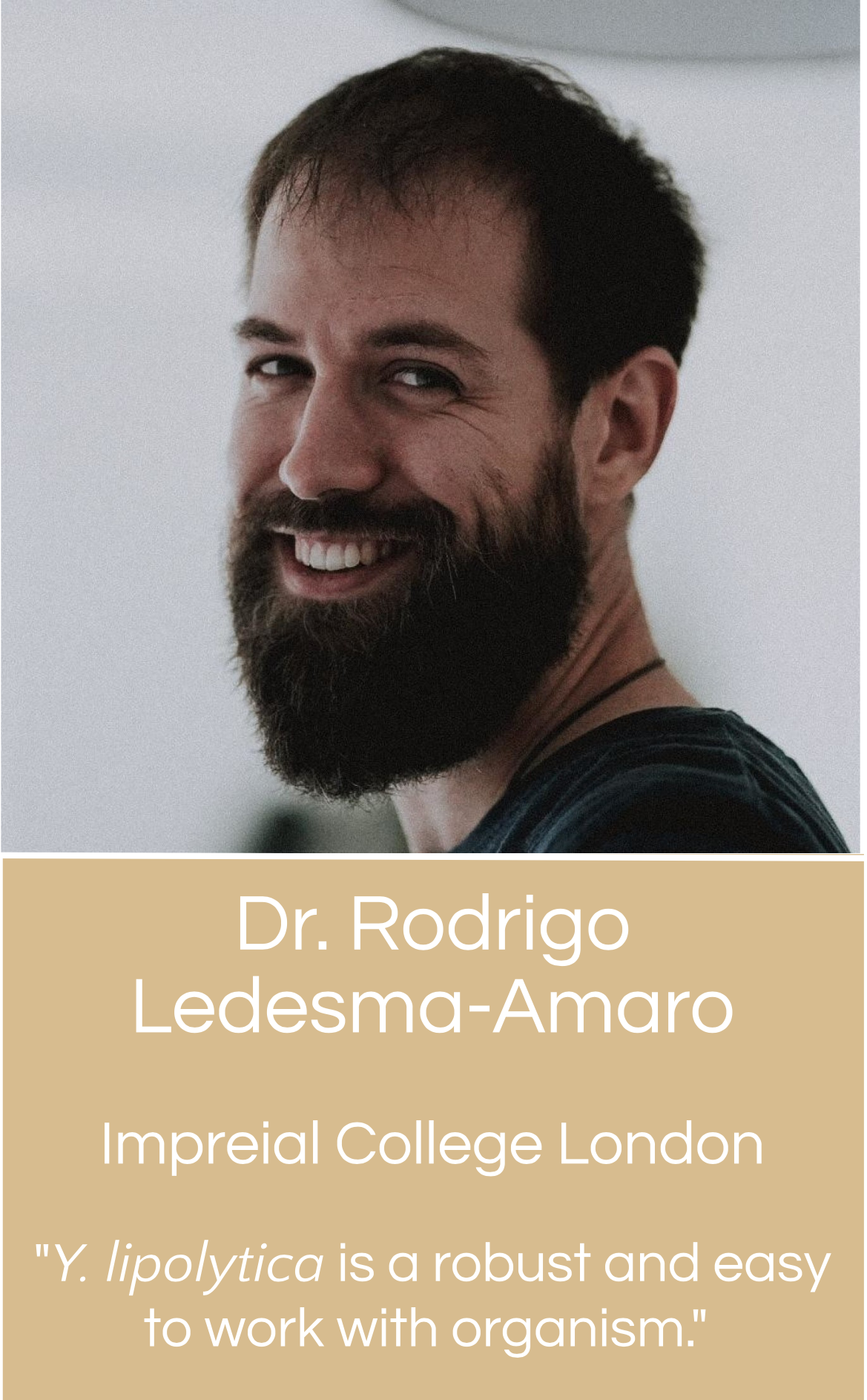 Cellulase Integration
By enabling our yeast to break down cellulose, it can be sustainably grown using local agricultural waste such as straw, leaves, and rice hulls as feedstock. We were advised by
Dr. Charles Mather 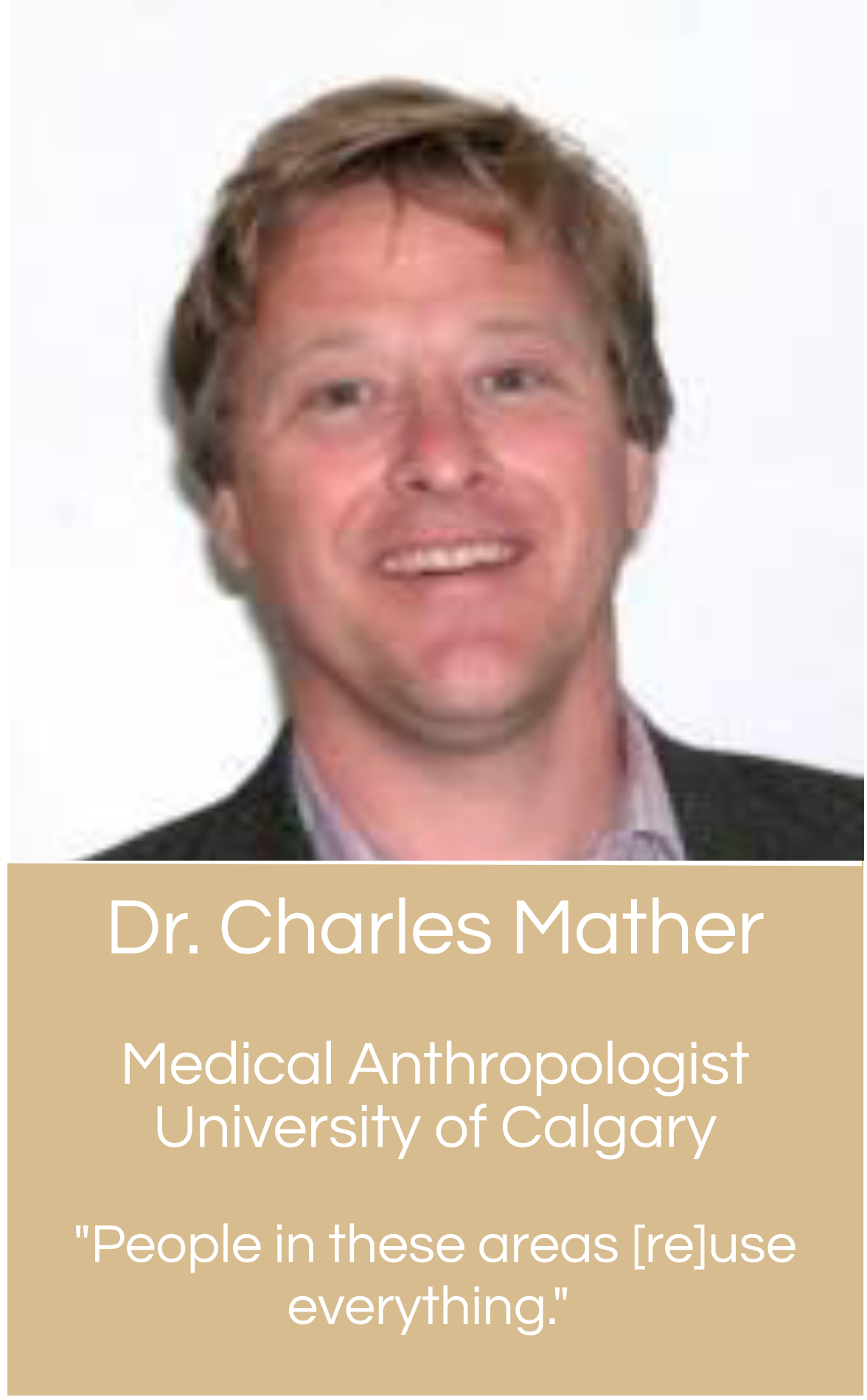 to make use of cereal crops for our yeast cultivation.

There are three classes of cellulase enzymes necessary for cellulose degradation: endoglucanases (EGs), cellobiohydrolases (CBHs), and beta-glucosidases (BGSs). We are engineering three strains of Y. lipolytica to each secrete one of the three cellulase enzymes that will be necessary to break down plant matter (figure 1).


Two of our critical cellulase enzymes were modelled and engineered to have better function in Y. lipolytica. However, all the constructs will be assembled together via Gibson Assembly, and transformed into Y. lipolytica using protocols and advice provided by
Dr. Ledesma-Amaro.

Once our transformations are confirmed by sequencing and protein secretion is confirmed using ELISA analysis, we will test our strains' cellulase activity on pure cellulose and crude plant biomass using a DNS assay. See figure 2 to see the cellulase integration design workflow:

Meanwhile, we decided to conduct experiments in order to test the general idea of Y. lipolytica growing on cellulose with the addition of cellulase enzymes. When we tested the growth of Y. lipolytica with direct plant biomass and 5mg/mL cellulase, growth was sustained for 2 days, after which there was a significant drop. We believe this is due to decreased access of the cellulase to the cellulose over time (figure 3). 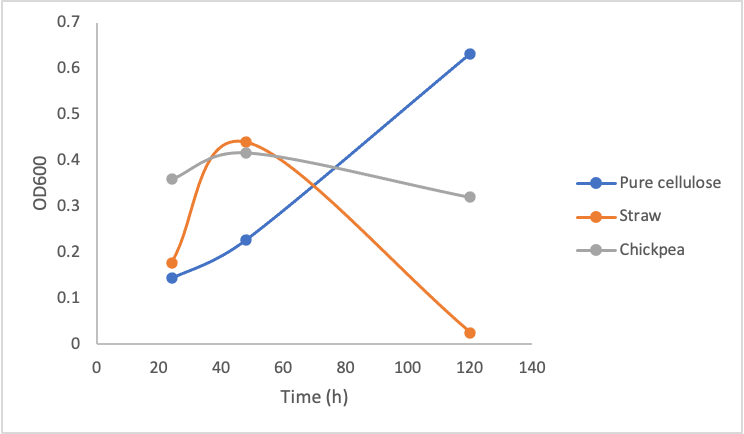 Figure 3. Growth of Yarrowia lipolytica in pure cellulose, straw, and chickpea shells over five days. 5mg/mL of commercial cellulase was supplied to each solution and OD600 measurements were taken to measure cell density.

Modelling
We utilised modelling to verify and obtain a working knowledge of our cellulase enzymes. Using molecular dynamic simulations and various engineering-based models, for example, we generated snapshots of our Oviita system. In particular, for our cellulase integration subproject, we used these simulations to modify two critical cellulase enzymes to have better function in Y. lipolytica: 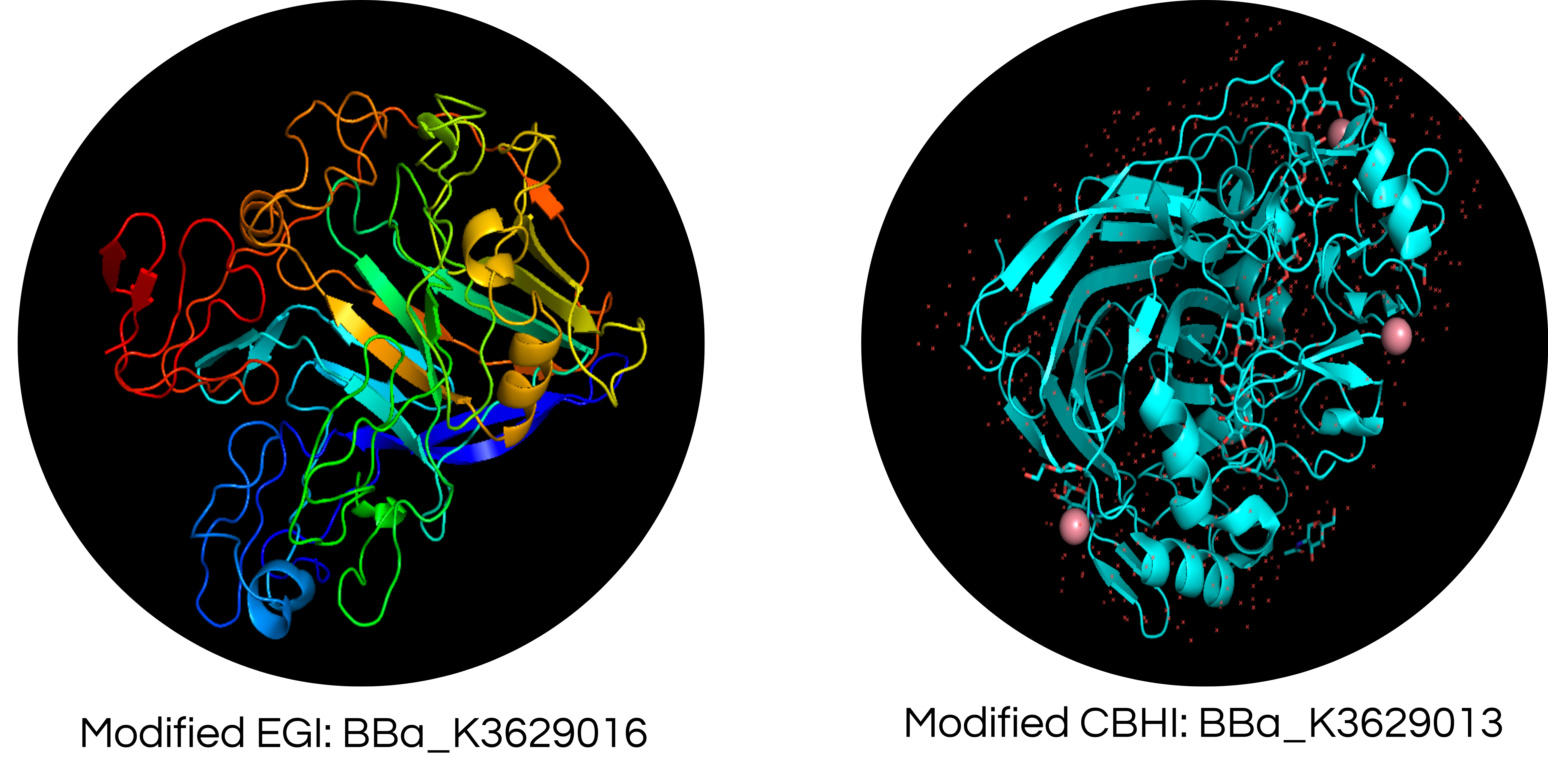 These two parts are the featured parts that we submitted to the registry this year. A few key residues from these enzymes have been modified to have their optimal pH increased by one unit and their temperature decreased to match optimal Y. lipolytica growth conditions.

These models also facilitated the development of our GausHaus, Sticks, Bellatrix, and hardware-software tools. Not only were these models made to understand our project, but they are also intended help other teams adapt our workflows for their own future use.

Bioreactor Design
To bring Oviita into communities, we needed to develop a system capable of culturing our yeast that was simple, effective, inexpensive, and flexible in design. With these criteria in mind, our strategy relies on two bioreactor designs: a Laboratory Adaptable Bioreactor (LAB) and a Field Adaptable Bioreactor (FAB).

The LAB mimics conditions that we expect in the field, providing data from an array of sensors that will influence our FAB design. To develop our LAB, we collected information from literature, mathematical models and our HP contacts, and conducted small experiments, such as the media’s change in pH as the yeast grows and how the yeast settles over time. With the LAB constructed, we are now simulating multivariable, real-world conditions to further our modelling and form predictions, with the aim of generating a range of variables that the FAB design can operate within.


Rather than a rigid FAB design, we intend to provide users with a flexible design and ideal growth ranges for variables such as temperature and aeration rate. Locals can then construct the FAB to fit their vision with the resources they have at hand. In addition to providing design starting points and information for each variable, we will develop an effective training program to enable our users to optimize Y. lipolytica growth and yield.

Biocontainment
In order to ensure engineering success in biocontainment, we went through the following steps: 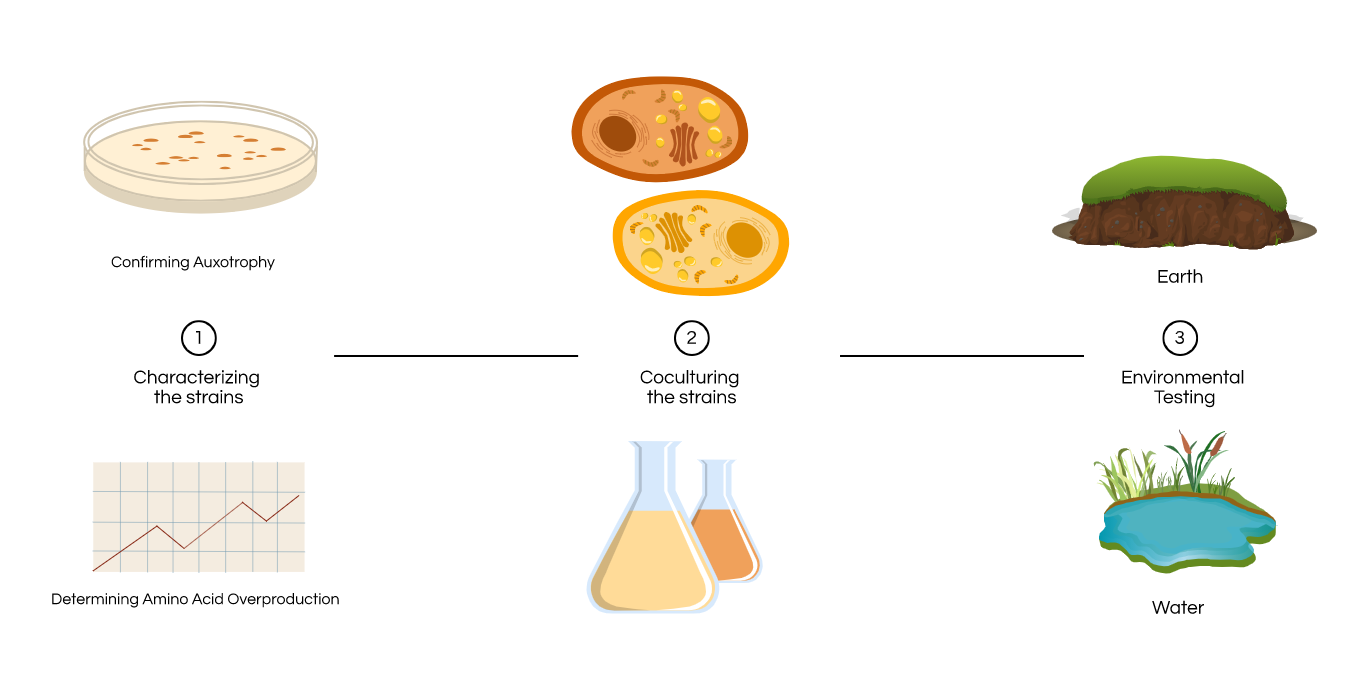 Current biocontainment strategies used in the industry revolve around the use of auxotrophic microorganisms where a constant supplementation of metabolites is required to keep the organism alive. Such methods, however, are unsustainable and unreliable especially for products that are meant to be implemented outside of the laboratory space. Therefore, we designed a robust, yet sustainable biocontainment system to tackle this issue using advice given by
Dr. Robert Mayall. 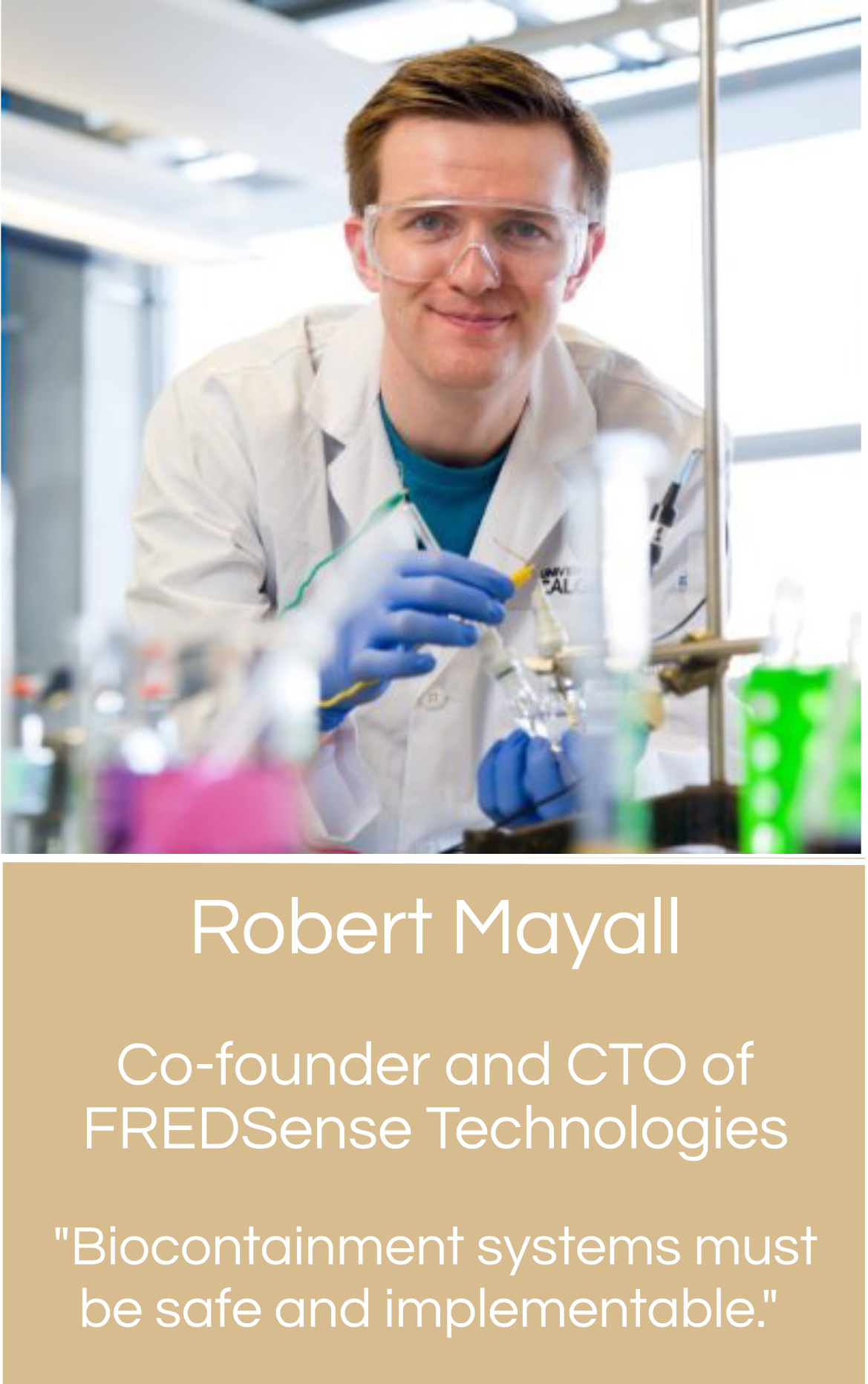 Our system used two strains of S. cerevisiae cultured together in a syntrophic community. Each yeast strain was auxotrophic for an amino acid the other strain overproduced, resulting in the strains being required to stay together in order to survive and proliferate. 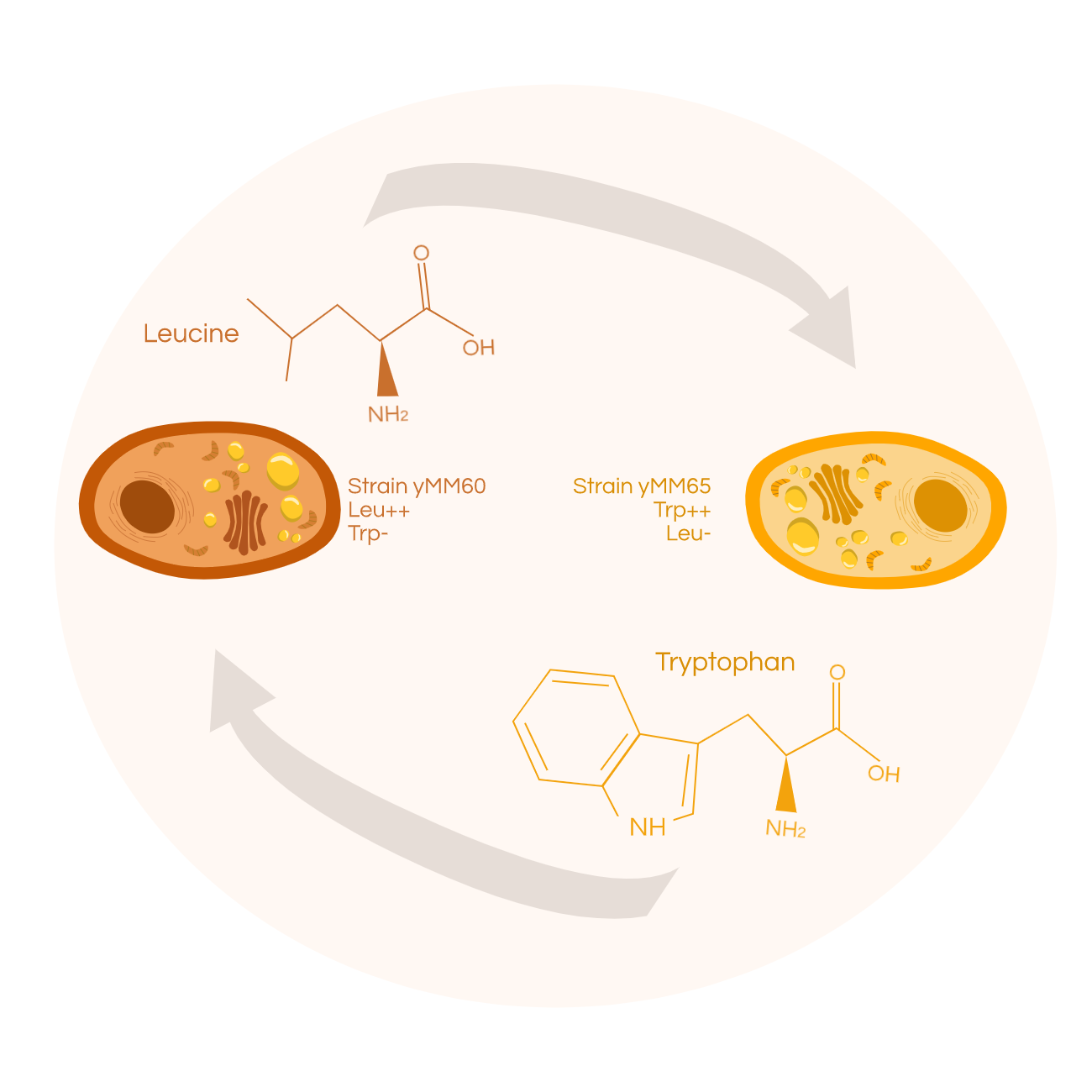 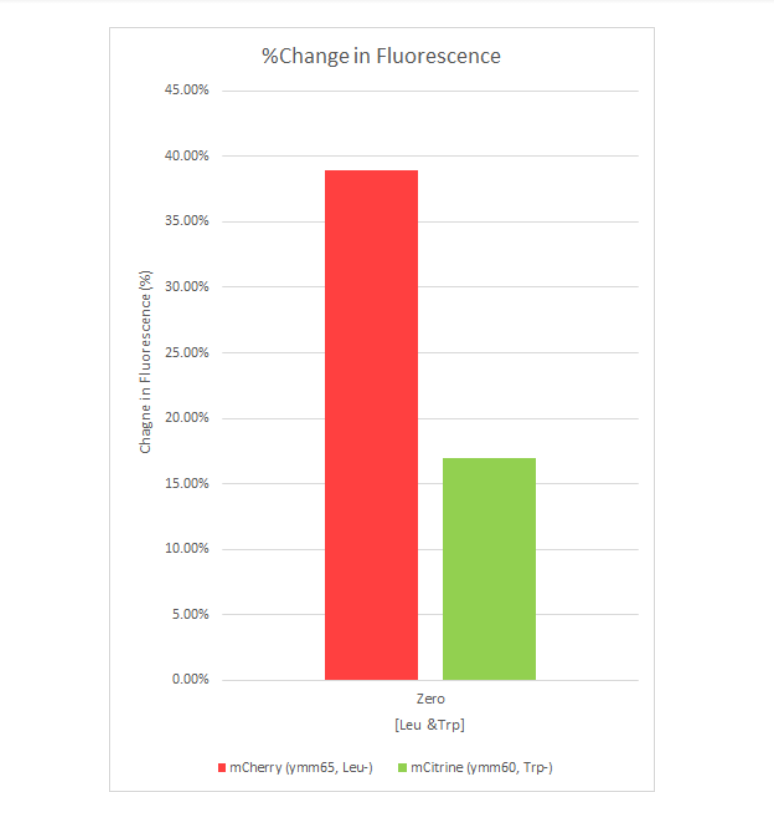 Figure 3. Relative growth rate of the Leu- (ymm65) and Trp- (ymm60) in the co-culture containing no leucine or tryptophan over two days, measured as the change in the fluorescence of mCherry and mCitrine, respectively.

To test the efficacy of our biocontainment system, we grew the complementary yeast strains in media lacking the required amino acids and showed that strains were able to set up an obligatory mutualistic relationship and support each other’s growth over two days.

We also tested the ability of the environment to support the growth of each of our yeast strains. We determined that the yeast strains were unable to grow in environmental samples such as soil and river water, indicating a low likelihood of microorganisms escaping into the environment. Given the success of our auxotrophic system in S. cerevisiae, we plan to integrate this system into Y. lipolytica in the near future.

Our proposed implementation strategy focuses primarily on two things: easy cultivation and preparation of the Oviita yeast and increasing access to the yeast through microenterprises. As Y. lipolytica is generally recognized as food-safe, it needs to only be heat-killed (cooked) before being safely ingested. To help integrate the yeast in with local cuisine, we researched and compiled a collection of local recipes that include our yeast.

We also believe that a successful organization relies on a network of people at all levels. After speaking with the founders of Western Heads East, an organization that empowers groups of women to start small enterprises that monetize probiotic yogurt, we decided to implement a similar model into our organization.

Their success has proven that these microenterprises, when combined with our health product and training, can cultivate positive change, stimulate economic development, and foster good health within their communities. This model also enhances the sustainability of our organization, as it not only provides an efficient means of distribution, but also encourages the consumption of our product. With help from our partners, community health workers, and a local university research group in our pilot area, we will develop a training program designed to provide these women with the tools and knowledge they need to succeed. This training will include information on vitamin A deficiency, our bioreactor, and entrepreneurship. From there, we hope to expand this program to a greater number of local women’s collectives, as well as other disenfranchised groups.

Deworming
According to
Dr. Dia Sanou 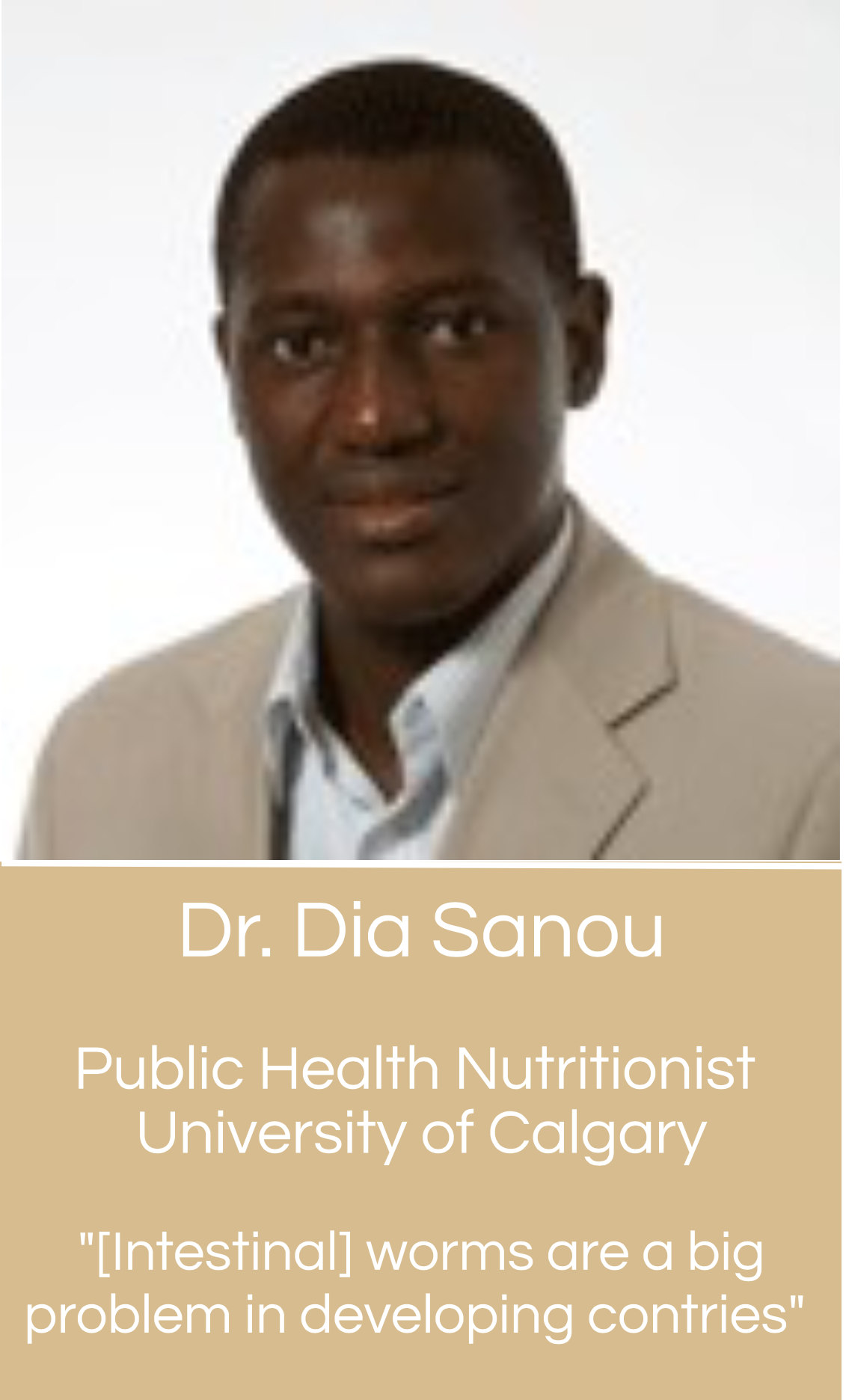 , a public health nutritionist, intestinal parasite infection runs rampant in our target communities, impeding micronutrient and vitamin absorption. Typically, vitamin A supplementation is coupled with biannual deworming, but lack of access to clean water and proper footwear results in the return of the parasites. To address this, we plan to engineer Y. lipolytica to produce thymol, an anthelmintic agent found in thyme leaves. 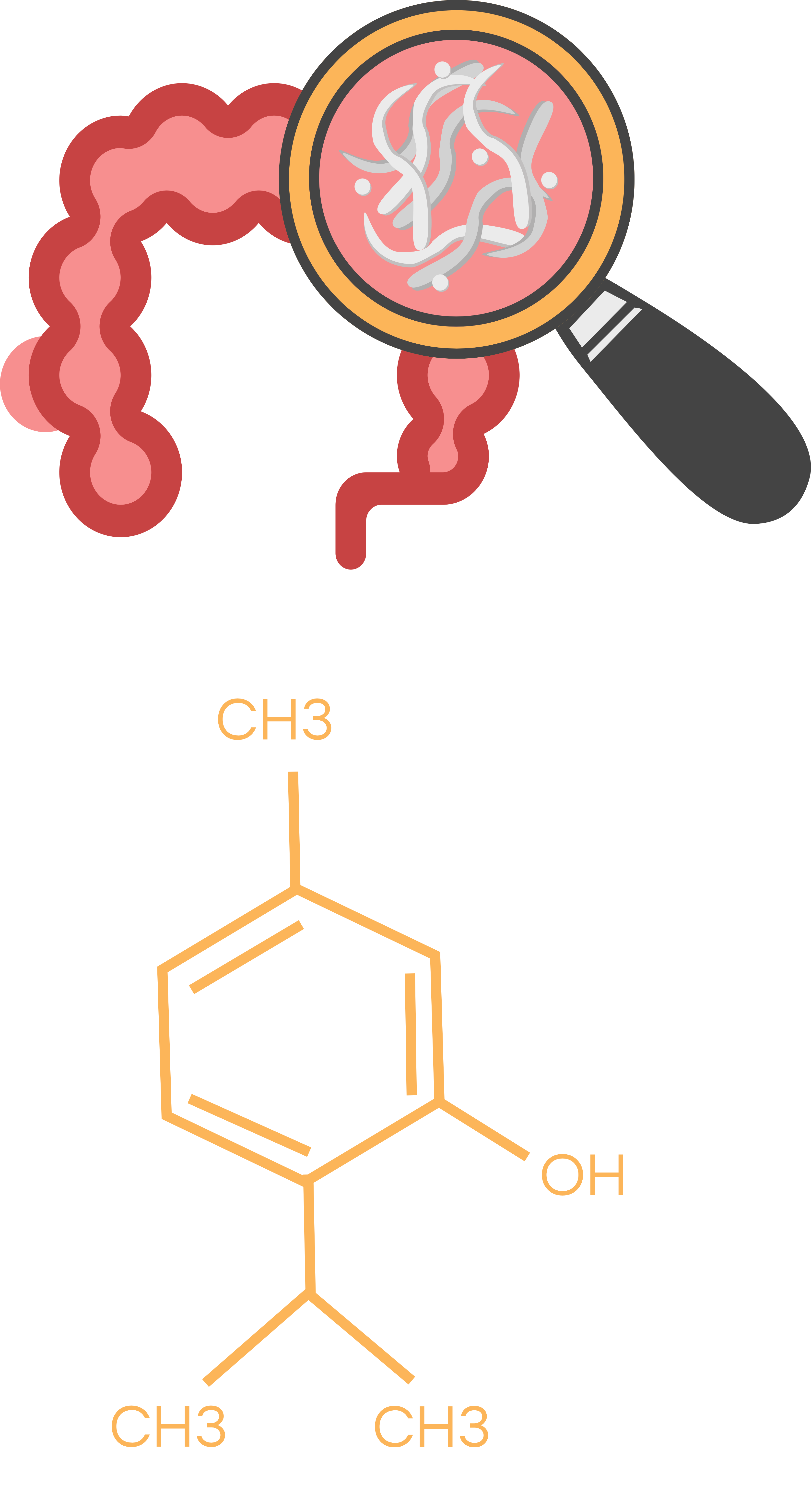 Figure 1. Intestinal parasites (up) and the molecular structure of thymol (down).

A terpene synthase and a cytochrome P450 are the two enzymes necessary to create thymol from geranyl diphosphate, a natural precursor molecule found in Y. lipolytica. These enzymes will be cloned using Gibson Assembly and transformed into our chassis through lithium acetate transformation. An SDS-PAGE will then be performed to confirm protein expression, alongside GC/MS to verify and quantify thymol production.

When we met with
Dr. Samir Gupta 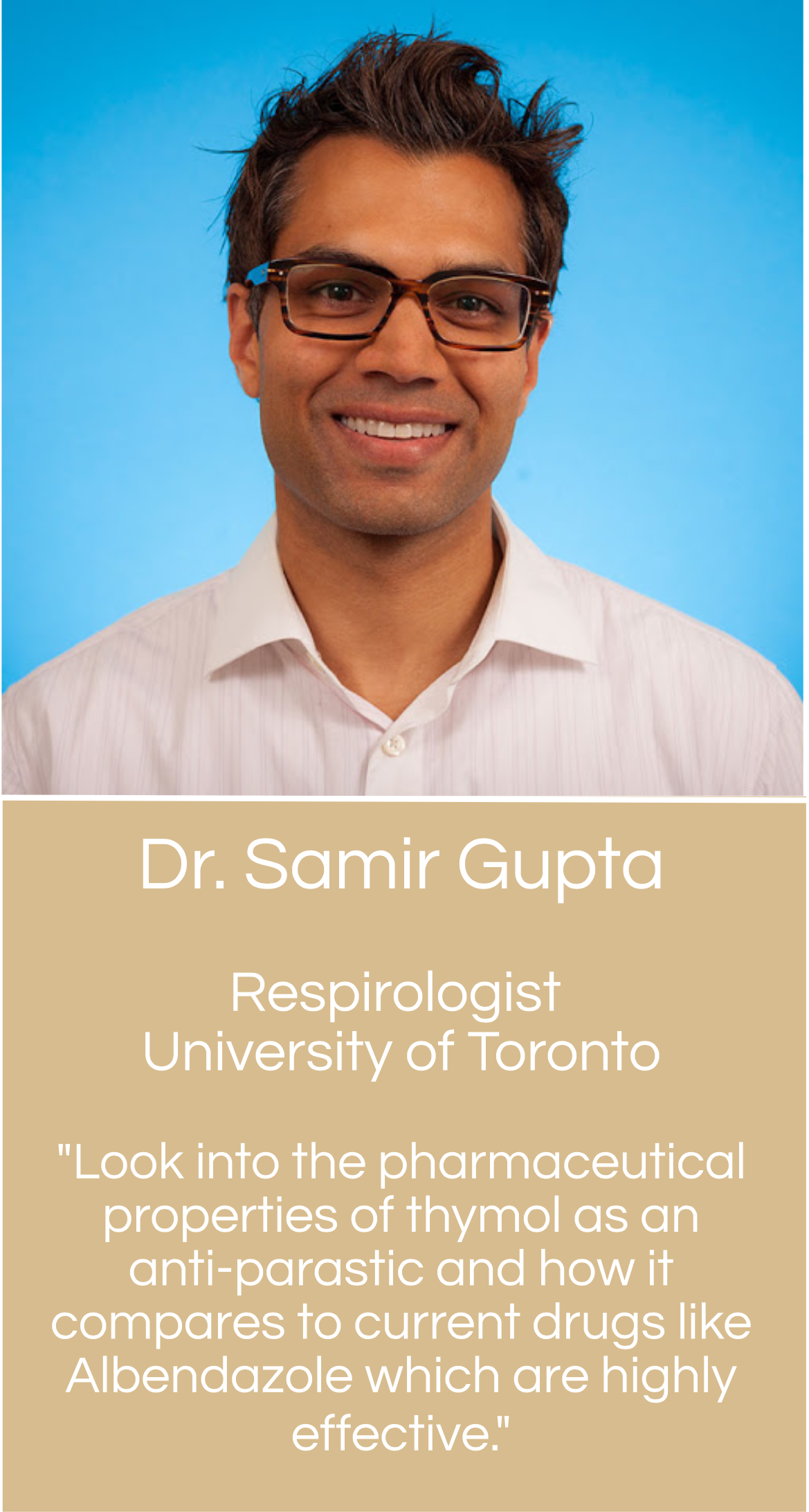 , a respirologist who has worked on VAD and deworming initiatives, he emphasized the importance of efficacy and safety of the compound before implementation. Upon successful thymol production, we will therefore test its efficacy on Caenorhabditis elegans (the gold standard for anthelmintic testing) and Ascaris lumbricoides (a common intestinal parasite in our target demographic). These tests will help us determine the optimal dosage of thymol for ingestion, and inform future iterations of our constructs. Overall, thymol production will follow this design workflow: 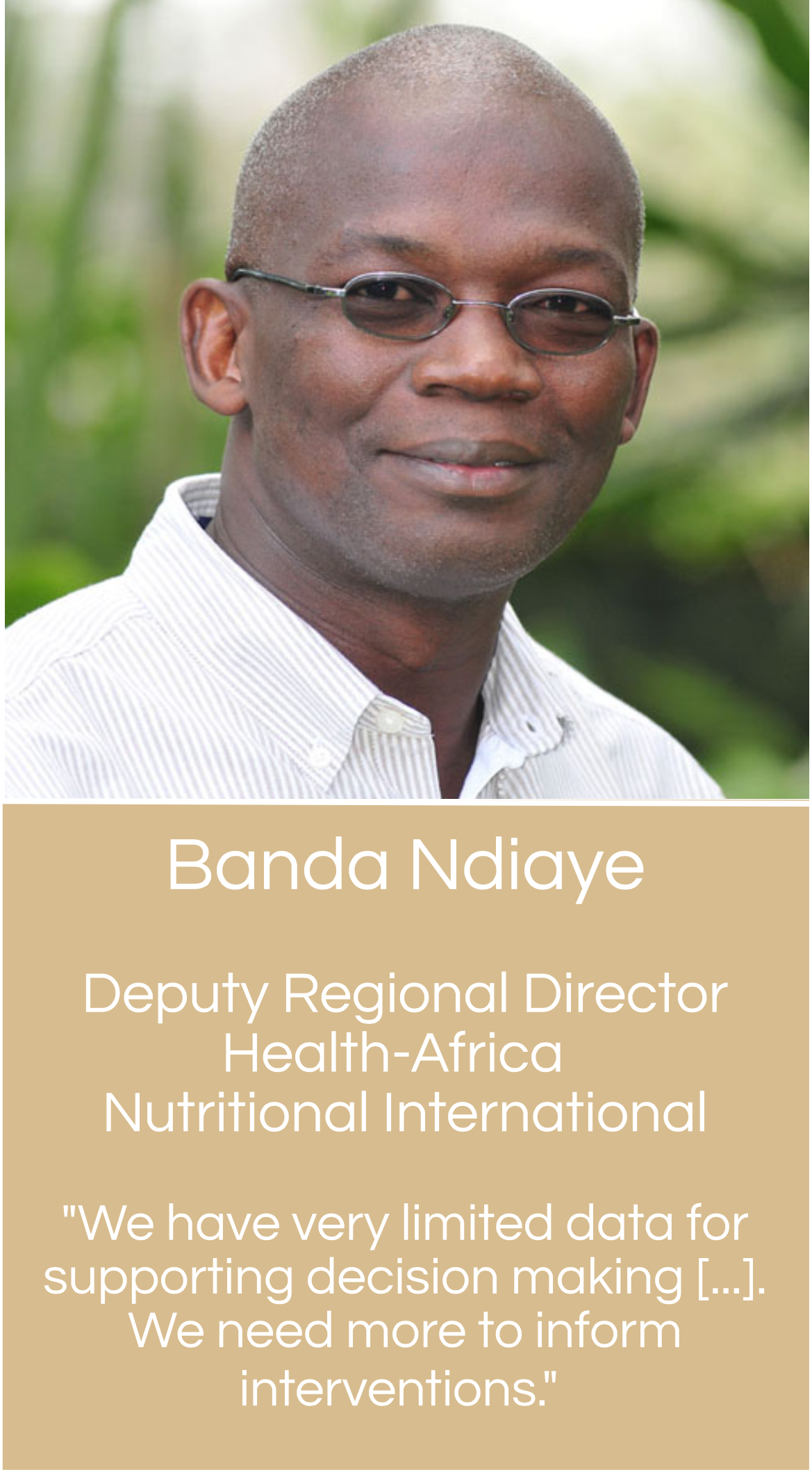 that more data is needed to understand the prevalence of VAD in order to inform interventions. The Randle’s Cell Testing Device is a field-based diagnostic test that attempts improve upon current methods used to diagnose VAD. This test uses aptamers to cause retinol binding protein in a blood sample to bind to the electrodes. The resultant electrical changes in the electrodes enable the quantification of vitamin A levels. This year, we constructed an impedance measurement circuit capable of quantifying the impedance changes that would occur when a blood sample containing retinol is tested. 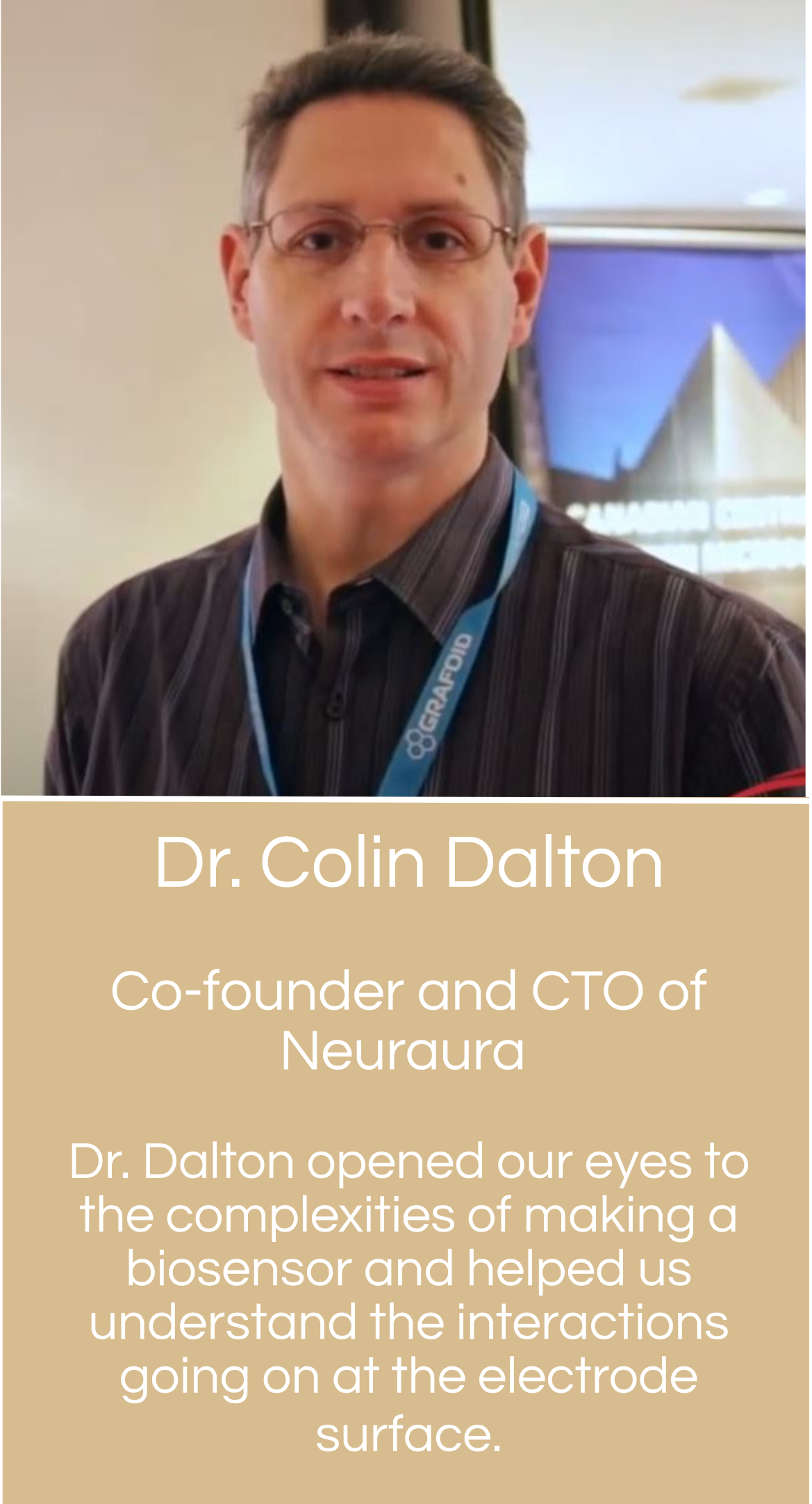 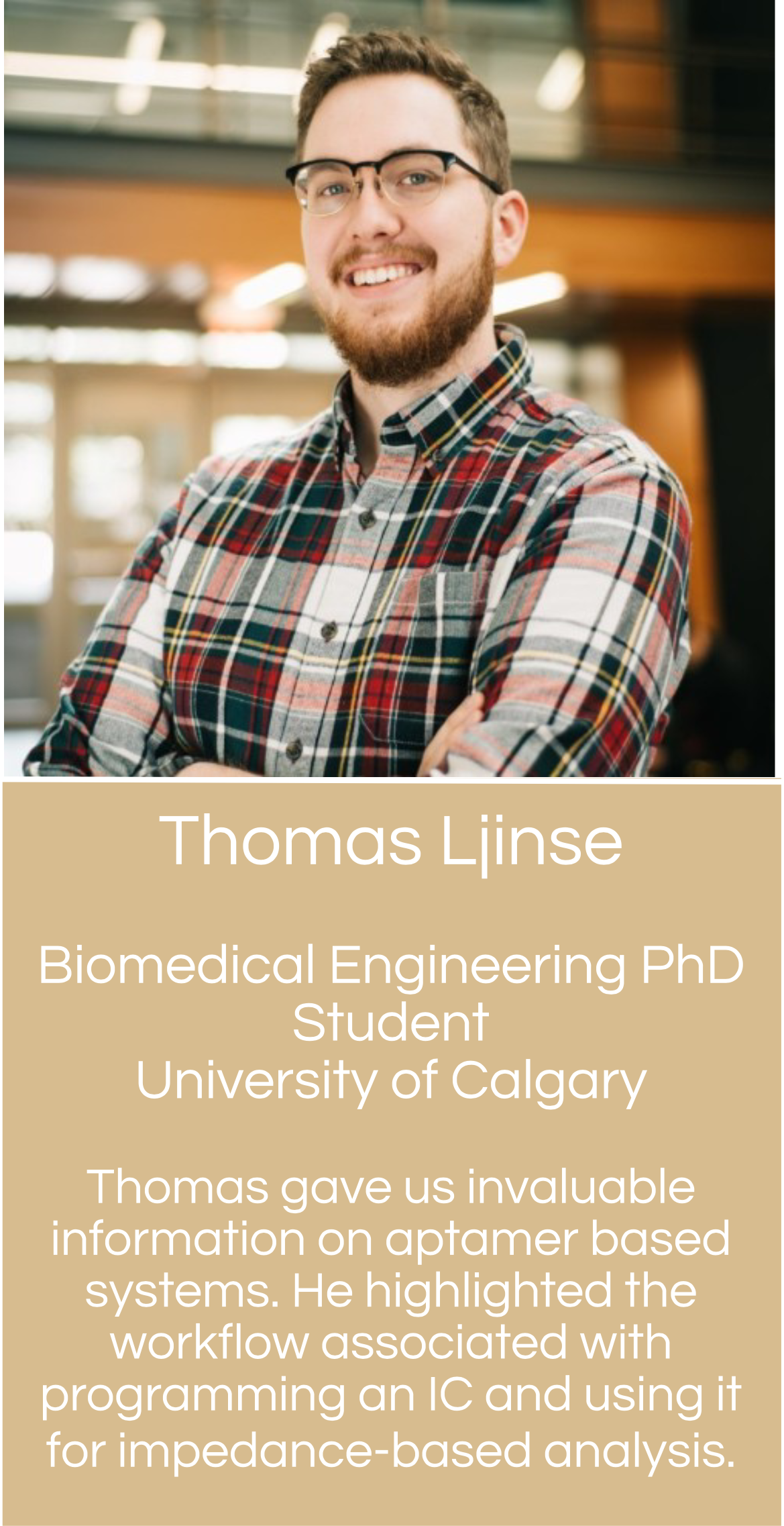 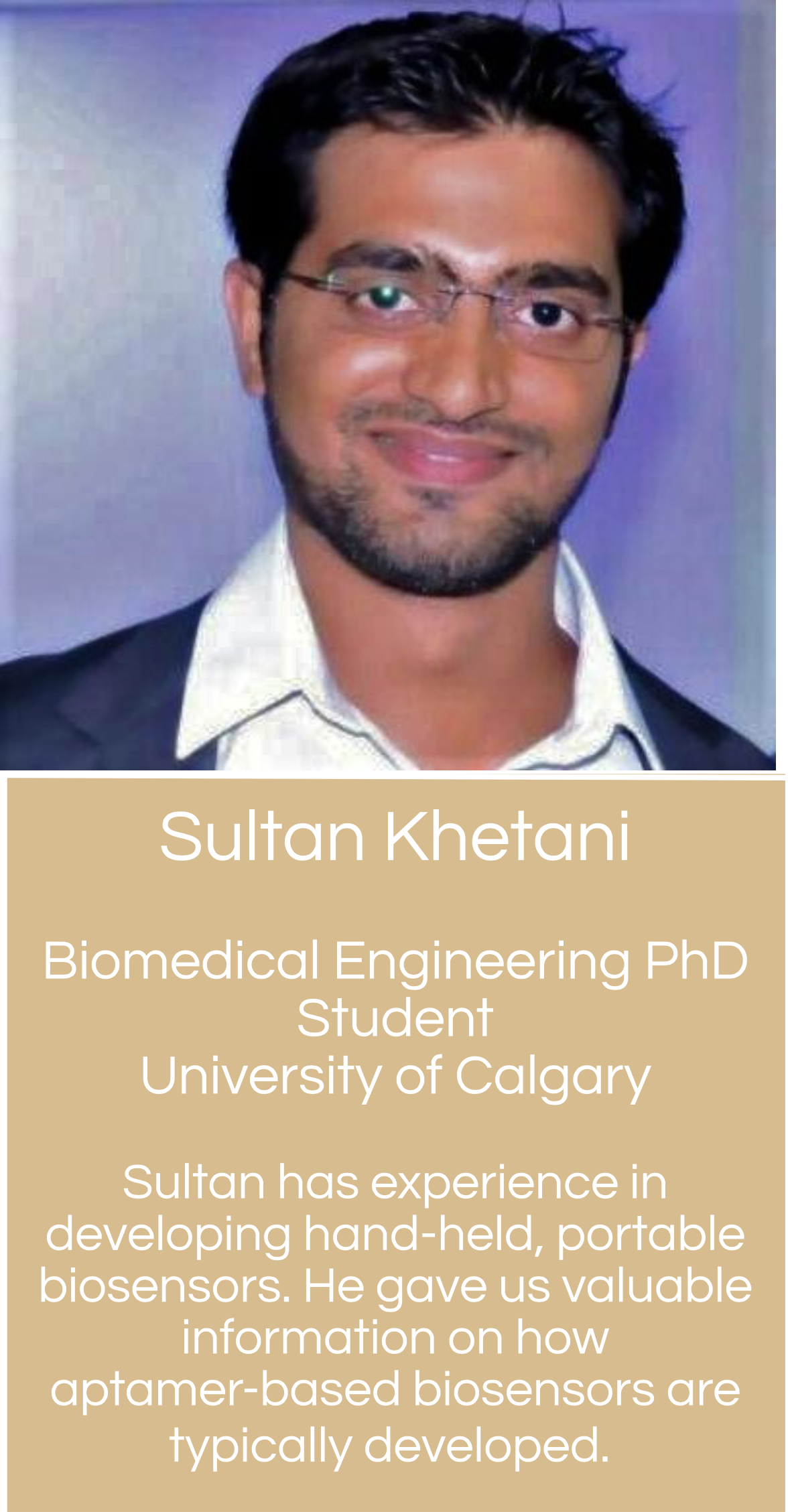 were some of our HP contacts who helped us immensely during our quest to develop a prototype. In order to do this, we sourced a commercial integrated circuit, the AD5933 by Analog Devices, and interfaced it with the popular microcontroller, the Arduino Uno. Using the Arduino IDE, an extensively documented code was written to calibrate the AD9533 to run impedance spectroscopy. This code was designed for customization and modularity to facilitate the use of the impedance analyzing device for a broad range of future applications in addition to its intended use. As a proof of concept, we used the AD5933, measured the known capacitive and resistive loads with a high degree of accuracy, and also conducted a frequency sweep on an aqueous solution (figure 1).


We intend to first verify the patent regulations surrounding our selected aptamer. We will then proceed to verify how selective the aptamer is to retinol binding protein, and immobilize this aptamer to an electrode to then test the impedance measurement circuit’s ability to quantify retinol binding protein levels.

We would like to extend heartfelt thanks to our sponsors, supervisors, and community partners, whose support made our work on this project possible.

Figure 1. The logos of our sponsors, whose support made our work on this project possible.