It was an accidental thought.It all started by a conversation I took with a friend.I learned that he had been entangled in algae at a beach in Qingdao.We looked up more news information and found that cyanobacteria had caused a great disturbance to the production and life of human life,including an acute cyanobacteria poisoning accident occurred in 6 ponds of a fishing ground in Lingwu, Ningxia.

If cyanobacteria float on the surface, they prevent other creatures from using the sun's rays and living.This seriously disrupts the balance of the waters.Cyanobacterial toxins can kill fish and even poison humans. 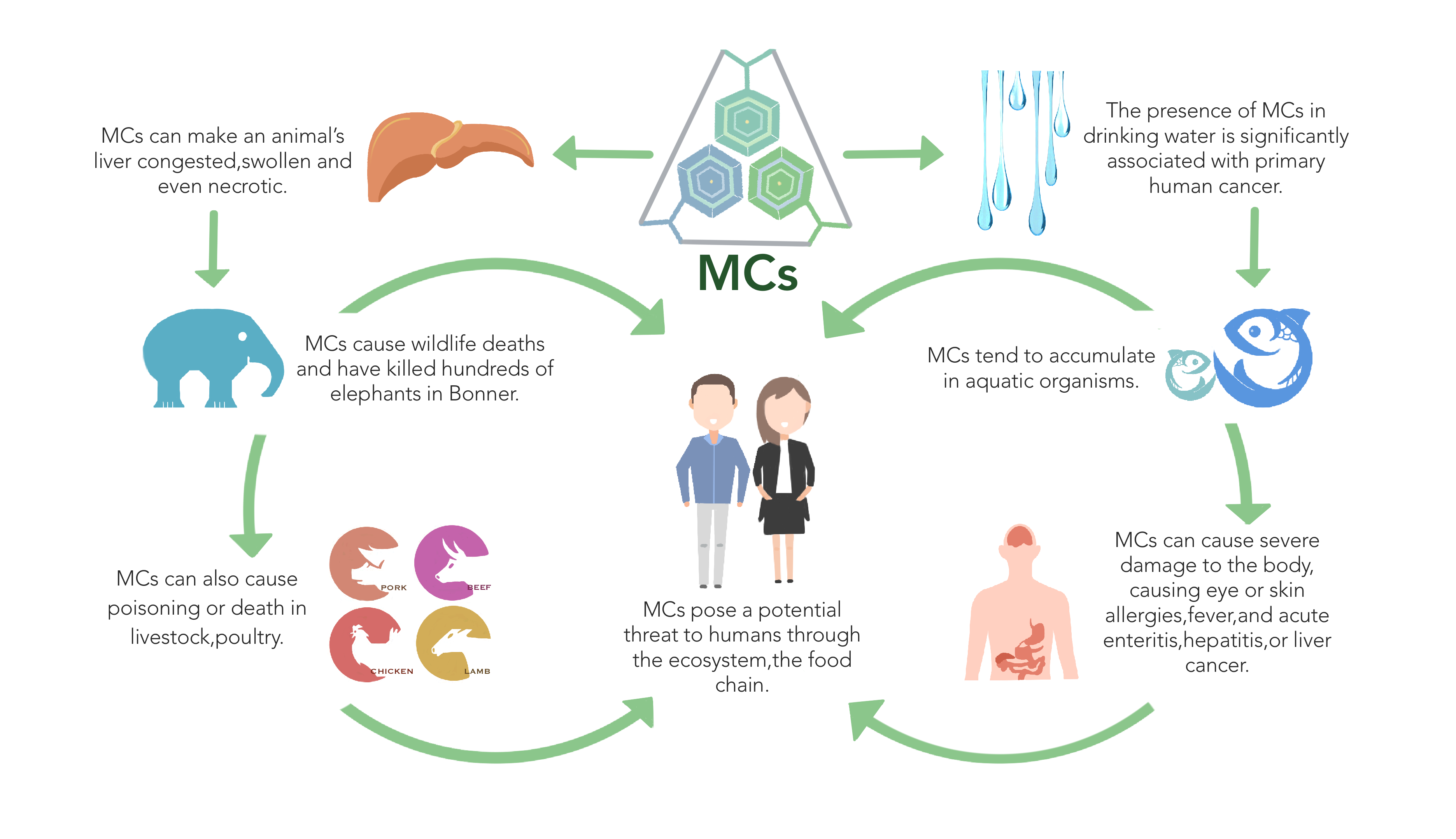 Eutrophication in water leads to cyanobacteria bloom occurring more and more frequently.The biggest hazard is the production of MC toxins.MCs is a kind of algal toxin with the highest frequency, the highest content and the highest toxicity.MCs can also enter and accumulate in the body through drinking water, diet and recreational water, posing a serious threat to the safety of drinking water and human health.

We found it’s hard to degrate MC toxins because of its stable structure.So we decided to use biological methods.

Our team has come up with creative ways to use modified cyanophages to solve the problem of harmful cyanobacteria.We found that mlr gene cluster from Sphingomonas sp. can solve this problem well, or more specifically, degrade ADDA-ARG and then reduce its toxicity.That transfers the MLR gene from other species to cyanophage bodies. We designed two parts: mlrA of Spinosidium , which was also used in Peking University in 2014, and mlrA of Novosphingobium SP. THN1. In the degradation part of Microcystin-LR, we characterized BBA_K1378001, add new data for the existing parts and make contribution. Replace the original promoter J23110 with a stronger constitutive promoter J23119, and transform this part into E. coli JM109.

To make cyanobacteria to perform only the functions we want without breaking the ecological balance.After the artificial "upgrade" of the cyanophage, we also decided to add "handcuffs" to ensure that the cyanophage always implements its functions in the right place and does not spread to the environment or breaks. Take the tail shell protein gene as an example. If we change the gene 741 T into G, making the UAG replaced by boc in the original the amino acid lysine, so only when there are natural amino acids, it continues to copy, or nothing happens.

We designed the unnatural amino acids system to prevent the escape,BBa_3699006. This part integrates orthogonal translation systems together, which facilitates the introduction of the system in E. coli that can specifically recognize UAG and Boc-lysine. We first test whether the system works in E. coli. When this system is finally introduced into the cyanophage genome, the reproduction of cyanophage is controlled by unnatural amino acids.