Early in 1994, Sphingomonas sp. ACM-3962[9] was identified as the first bacterium capable of degrading MCs as sole carbon and nitrogen source for its cell growth.[1] Afterwards, other bacteria including Sphingomonas sp. [3,9], Sphingopyxis sp. [4-6,8], Novosphingobium sp.[1] And Stenotrophomonas sp. [7] were characterized to be able to degrade MCs.

Figure 1. Comparison of MC-LR degradability of different strains. The original data from previous studies were all equivalent to the degradation effect within 24 h. In the original study, the conditions of each strain were slightly different; however, by comparison, we can find out which strains have been proven to have higher degradation capacity.

We selected the mlrA gene from Novosphingobium sp. THN1 (BBa_K3699001), adding the promoter J23119, RBS (B0034), and terminator. After that, the entire sequence (BBa_K3699005) was introduced into pKMV and yielded the recombinant plasmid pKMV-mlrA-THN1, which was transformed into E. coli JM109.

Figure 2. Schematic map of pKMV-mlrA-THN1. We used the same promoter J23119, and transformed the plasmid into E. coli JM109.

We used ELISA kits to detect toxin levels in samples (Ordered from Zhenke Biotec). Detailed methods can be viewed on contribution and method pages.

We measured the concentration of toxin in the reaction system every 6 hours (Fig. 3 and Fig. 4).

By comparing BBa_K1378001 with our newly designed part, we found that both of them can degrade MC-LR effectively, but BBa_K1378001 possessed slightly higher degradation efficiency under the conditions of this experiment.

Comparing the degradation rates of 18 h and 24 h, it was found that the degradation efficiency was not close to the maximum at 18 h of reaction (which is different from the experimental results of BBa_K1378001). Therefore, we speculate that the new MlrA enzyme can degrade MC-LR more thoroughly in a longer degradation time, although its results are slightly worse within 24 hours.

To sum up, we have characterized our new MlrA enzyme from Novosphingobium\ sp. THN1. It is indicated that it can degrade MC-LR with favorable efficiently.

As mentioned in the design, we will use recombinant cyanophage as the chassis to metabolize the microcystins. In any case, cyanophage is a virus, and safety issues always come first. After the artificial "upgrade" of the cyanophage, we also expect to add "handcuffs" to ensure that the cyanophage would always be implemented in the right place and would not spread to the environment or break up the original ecological balance.

The handcuff mentioned above is the “tail” protein with UAG inserted.

We have made a base substitution at position 747 (T747G), which converted the Tyrosine codon to a stop codon and lead to the early termination of protein translation. In order to facilitate plasmid conctruction, we added BamHI and SacI cutting sites at both ends of the gene. 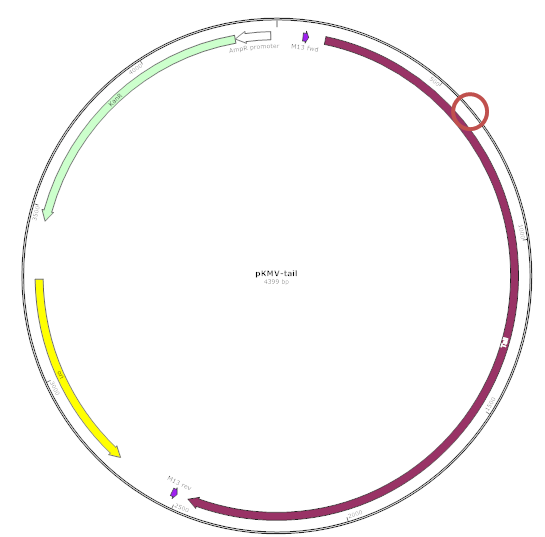 Figure 1. sequence of the tail protein. We made a base substitution at position 747 (T747G), converting TAT to TAG.

We speculate that the mutated phage tail sheath protein will not be fully expressed, but a truncated protein.

Plasmid pKMV-Tail was synthesized by BGI Tech. On this basis, we constructed the plasmid pET28a-Tail by digesting pKMV-tail and pET28a with BamHI/SacI enzyme digestion and ligation. Plasmid pET28a, which contains T7 promotor, is an excellent expression vector in E. coli BL21 (DE3) with IPTG addition. The tail protein gene will be highly expressed.

We demonstrated the success of plasmid construction by enzymatic digestion.

Expression of the truncated Tail protein

We transferred pET28a-Tail into E. coli BL21 (DE3). As expected, it should express a truncated protein of 29.7 kDa.

From left to right:

The introduction of stop codon caused the early termination of protein translation. The recombinant E. coli expressed a truncated phase tail shear protein as expected. In other words, if the stop codon was introduced into the cyanophage genome, it will become a virus that can not release or infect cyanobacteria, thus preventing the escape of recombinant phage.

From virus to human, the same set of genetic code is employed, which contains the start codon, three-stop codons (UAA, UAG, UGA), and the remaining 61 codons encoding 20 kinds of amino acids. However, some exceptions have been found, such as pyrrolysyl tRNA synthetase/tRNA (pylrs/tRNA) from Methanosarcina mazei, which can recognize the amber codon UAG and translate it into pyrrolysine. Moreover, in E. coli, yeasts, and mammalian cells, this PylRS/tRNA pair is orthogonal, which means it does not interfere with the translation system of the chassis[1]. The orthogonal translation system has been used in vaccine safety design [2]. Now, we will use it to achieve the anti-escape design of cyanophages.

We finally decided to use the orthogonal translation system from Methanosarcina mazei. It has been used in E. coli. The Pyrrolysyl-tRNA pair was designed according to the paper published by Wang et al, 2012 [3]. In addition, Tatsuo Yanagisawa et al found that the Y384F mutant of MmbocRS had higher aminoacylation activity [4]. Based on the previous reports, the MmBocRS (GenBank NZ_ Cp009514.1 3998898-4000262) was designed to convert Tyr (306) and Tyr (384) to Ala and Phe, respectively. The J23119 promoter was employed to drive MmBocRS expression. PyltRNA (GenBank: NZ_ Cp009514.1 3998599-3998670) was initiated by proK promoter. BamHI restriction site at 5 'end and HindIII restriction site at 3' end were introduced to facilate plasmid construction.

The BBa_3699006 part integrates orthogonal translation systems together, which facilitates the introduction of the system in E. coli, which can specifically recognize UAG and introduce Boc-lysine. We firstly tested whether the system works well in E. coli. When the system is finally introduced into the recombinant cyanophage genome, the reproduction of cyanophage is controlled by addition of unnatural amino acids.

2. Plasmid pMCS3-RS-tRNA was constructed by digesting pMV-RS-tRNA and pMCS3 with EcoRI-XhoI double enzyme digestion and ligation.

We tried to verify whether pMCS3-RS-tRNA was successfully constructed. It demonstrated the success of plasmid construction.

Expression of the full-length Tail protein

To test whether the orthogonal translation system works well, the previously mentioned plasmids pET28a-Tail and pMCS3-RS-tRNA were co-transformed into E. coli BL21 (DE3). If the full-length tail protein is expressed, the system works normally.

At first, we couldn't transfer the two plasmids pET28a-Tail and pMV-RS-tRNA, which contains the Tail protein and the pyrrolysyl-tRNA synthetase respectively, into E. coli BL21 (DE3). They had different antibiotic resistance gene but share the same replicon protein. Therefore, pMCS3-RS-tRNA was constructed, and it can be co-transfomed with pET28a-Tail into E. coli BL21 (DE3).

From left to right:

Bacteria with double plasmids was expected to express the full-length tail protein of 87.1 kDa. However, experimental results indicated the expression of truncated tail protein (Lane 8). The protein expression level is lower than that of the strain harboring a single plasmid (Lane 4).

There may also be weak expression of the full-length proteins, but the expression level is not high enough to be clearly visible by SDS-Page electrophoresis.

Subsequently, the fluorescent protein will be employed as indicators to validate codon expansion technology, and the expression of related genes would be optimized. These results would be probably presented in our next year iGEM projects.

[2] Hyung Soo Kim and Young In Park. Isolation and identification of a novel microorganism producing the immunosuppressant tacrolimus[J]. Journal of Bioscience and Bioengineering, 2008.