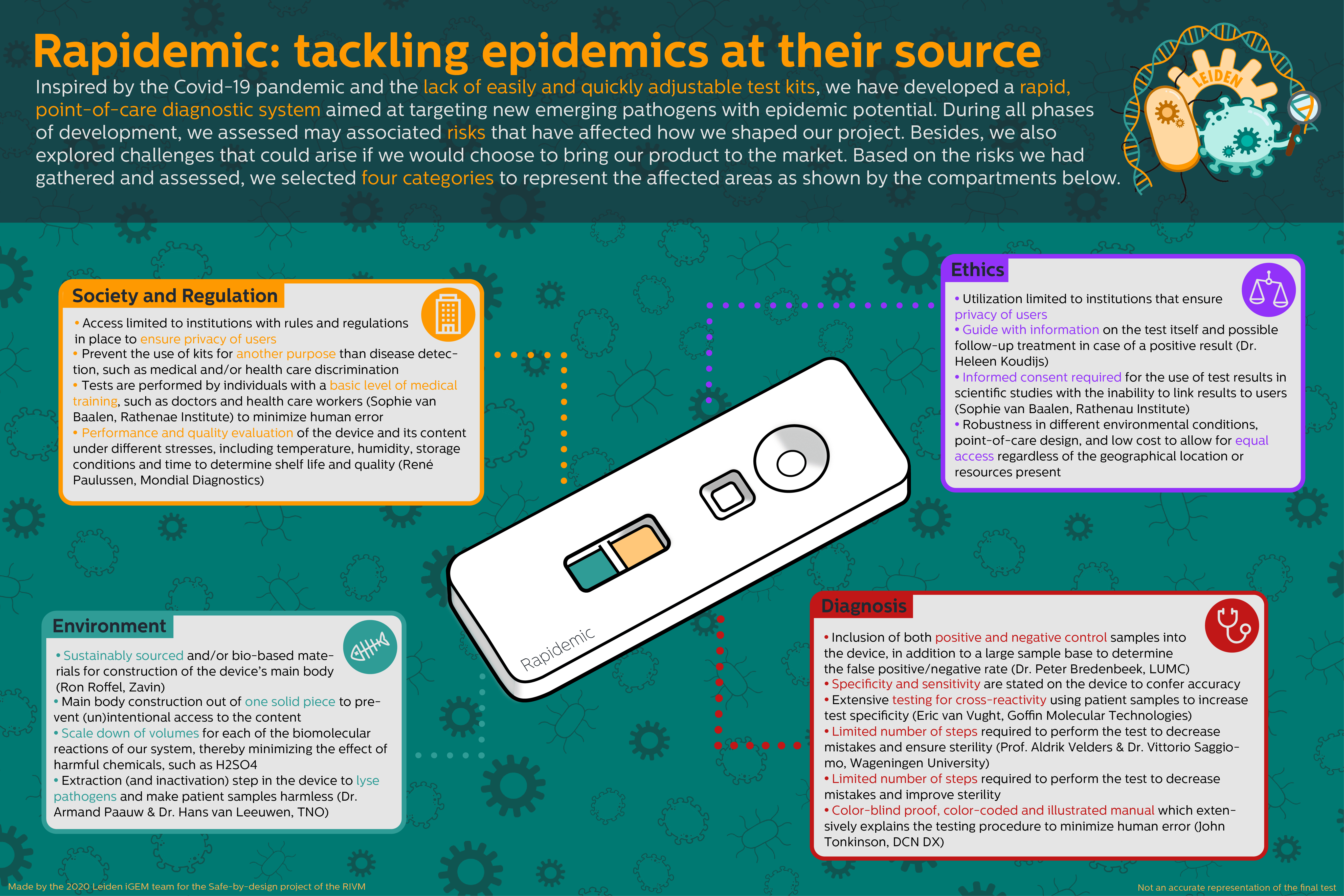 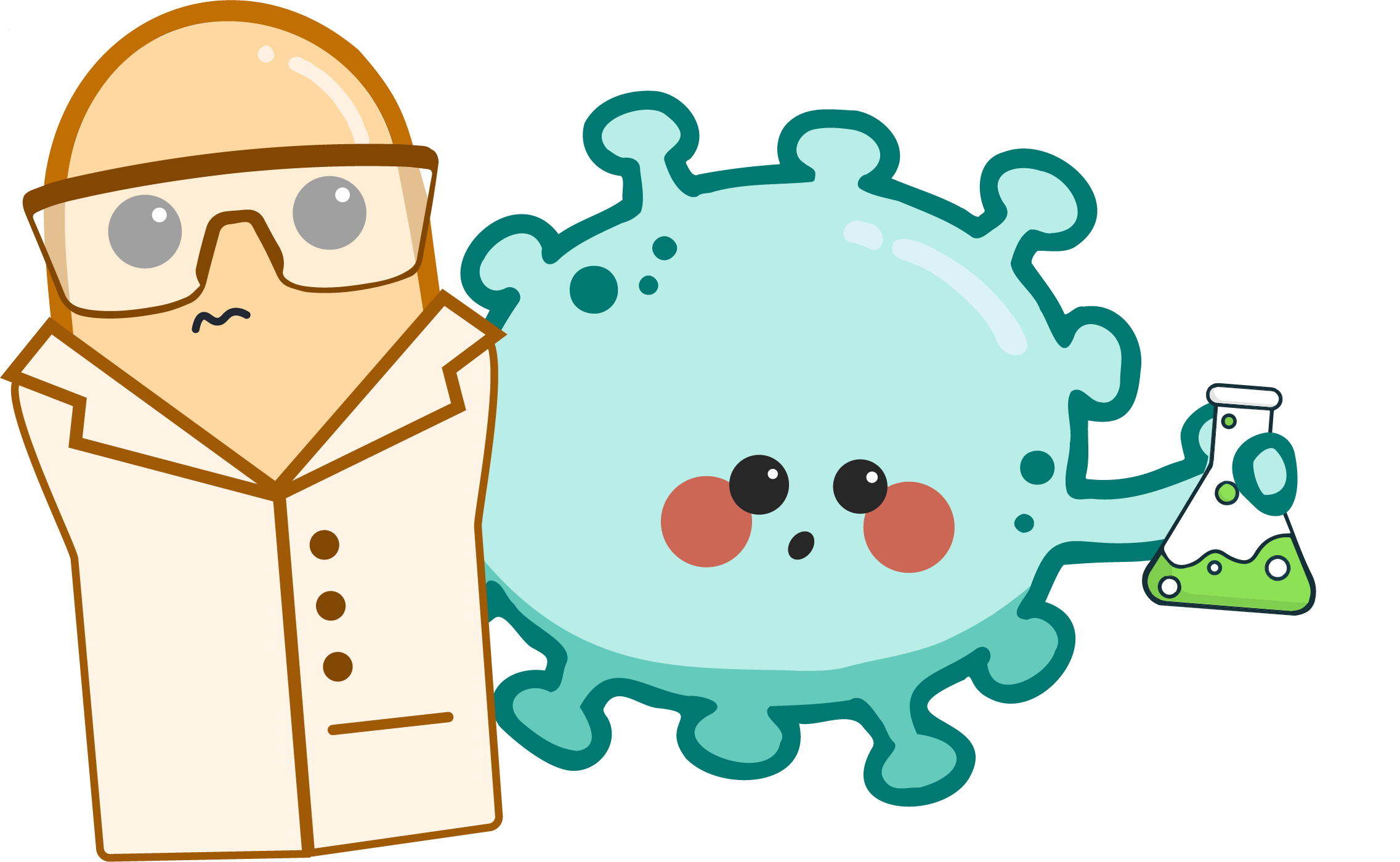 Throughout the development of the proof of concept for our point-of-care diagnostic kit, safety and security have played central roles. Our goal is to develop a commercial product from this proof of concept kit that will also be safe to produce and use. On this page, we will demonstrate how we examined and subsequently implemented measures to ensure the safety and security for all parties involved, from development to utilization.

Before we can discuss biosafety, we first have to define it in our project. Biosafety can be described as:

The containment principles, technologies and practices that are implemented to prevent unintentional exposure to pathogens and toxins, or their accidental release.

It implies that anyone handling (possibly) harmful pathogens or compounds needs to follow guidelines and regulations that are in place to prevent harm to themselves, the public or the environment1. Here we discuss the safety surrounding the development of our kit and some of the ethical concerns about the kit as a commercial product.

One of our initial experiments required the recognition of a DNA fragment specific to a pathogen whose presence we wanted to detect. In order to ensure biosafety, we already decided not to work with some of the organisms in question as these were human pathogens and would pose a risk for our experimentalists. Instead, we had planned to insert each of the species-specific DNA fragments into an Escherichia coli chassis, which is a well-studied microorganism that is considered versatile and safe. Therefore, it would have allowed us to retain the resemblance to an actual infected sample, without the need to use pathogens. However, to perform the experiments required to produce our proof of concept, it proved sufficient, and safer for our experimentalists to not use genetically modified bacteria. We eventually ended up removing the organism from the equation and instead ordered the constructs which were used to spike our samples with directly. This made both our system and experiments completely cell-free.

As part of the safety assessment for our initial experimental design choice, we looked into the legislation surrounding the use of microorganisms in laboratory research. Currently, there exist guidelines and legislation to prevent the release of genetically modified organisms (GMOs). However, during a meeting with the research organization TNO, it was explained to us that relatively few regulations exist to protect against risks that arise when (synthetic) DNA is (un)intentionally released into the environment2. For example, if this concerns a gene that encodes for antibiotic resistance, its (un)intentional release could lead to the emergence of resistant bacteria. This is a concept known as horizontal gene transfer (HGT); the (in)direct exchange of genetic material between two organisms that occurs without the need for reproduction.

In order to minimize the risk that our DNA constructs could pose to the environment, we designed them based on non-pathogenic pieces of genes from each of the organisms. Even if these DNA constructs would be taken up by an organism present, it could not lead to the production of an active, working protein.

Besides the safety of our experimentalists and the environment, we also greatly value the protection of our users. This includes providing them with highly accurate and trustworthy test results. Through several experiments we aimed to study two key aspects that determine the accuracy of our detection system, sensitivity and specificity.

The accuracy of a diagnostic system or device is commonly defined by its specificity and sensitivity. These two parameters allow to determine the likelihood with which a tested individual is infected with a particular pathogen3. While both need to be taken into account when developing a test, there often appears to be a trade-off4. High sensitivity, or the percentage of true positives that is correctly diagnosed, often negatively affects the specificity, or the percentage of true negatives that is correctly diagnosed, and vice versa. Designing a test to detect a DNA sequence that is common in the genome of the pathogen-of-interest could significantly improve the sensitivity. However, it could also increase the probability that this sequence is be present in the DNA of another closely-related organism, subsequently leading to a higher false-positive rate.

A system producing high levels of false positives and negatives could prove dangerous. An individual that, for instance, had contracted a disease but tested negative, could continue to infect others without being aware of it. On the other hand, an individual who unknowingly acquired a false positive test result could suffer from unnecessary stress. Sensitivity and specificity are therefore considered key concepts when developing a novel diagnostic system.

As we aim to develop a point-of-care diagnostic device to detect rapidly mutating respiratory-borne RNA viruses, these aspects became even more important. These pathogens regularly acquire changes in their genetic material and a test such as ours needs to be able to distinguish between different variants. Ultimately, this determines the proper course of treatment. The method it uses must have a false positive and negative rate that is as low as possible. Some of our experiments were thus focused on testing and improving sensitivity and specificity. For example, the former was tested by performing the RPA reaction with different template concentrations to obtain the minimally required DNA concentration that would allow for sufficient amplification. In contrast, the latter was examined through the addition of different template ratios for S. cerevisiae and influenza A virus. Unfortunately, the results of these experiments remained inconclusive for now and require additional testing. For more detailed information, visit the Results page.

While often used interchangeably, there is a clear distinction between biosafety and biosecurity. In contrast to biosafety, which seeks to protect the public and environment from harmful pathogens, biosecurity attempts to keep these out of the hands of malicious individuals and entities. This aspect of research therefore focuses highly on the protection, control and accountability measures that are in place to prevent misuse of laboratories and biological materials5.

With the rise of big data, this definition was considered outdated by the iGEM Bielefeld-CeBiTec Team of 2018. They believed that the current definition should not just be centered around 'laboratories and materials', but also include the safeguarding of 'biosecurity relevant information'5,6.

A theme closely linked to biosecurity is dual-use. Depending on the context, the definition of this term can vary. However, we chose to focus on it in the context of Dual Use Research of Concern (DURC) as the test results of a point-of-care diagnostic kit such as ours could be misused by a third party with malicious intent. For example, a company could refuse to hire someone or disadvantage current employees based on a medical condition. This concept is known as medical discrimination and is prohibited by law in several countries7,8. However, we still would like to assure protection against this type of dual-use in countries that lack the appropriate legislation and regulations, in case our diagnostic kit would make it to market.

One solution could be to only allow handling by an authority that already has some form of client or patient confidentiality in place. Our main focus groups are therefore doctors and health care workers. As the licensing of our technology to a company could also be an option, in contrast to in-house production and distribution, arrangements would have to be made to ensure these entities will still protect users and can assure their medical privacy.

Besides misuse of the test results, we also wanted to get a realistic overview on dual-use issues that could affect our own diagnostic device in the future. Therefore, we talked to several companies, such as TNO and Twist Biosciences to assess if and how currently existing devices are impacted. They informed us that malicious intent, as described above, is highly uncommon as there are safeguards and regulations in place to prevent such practices, both at the (inter)national and company levels. The chance of our diagnostic device itself being misused is even lower. See our Integrated Human Practices page for more information about our conversations with experts and companies in the field of molecular diagnostics.

Besides biosafety and biosecurity, ethical considerations also need to be considered when developing a diagnostic device. This concept can be defined as:

The discipline dealing with what is good and bad and with moral duty and obligation.

In the medical world, in which our testing kit would exist, ethics deals with the social aspects. These include privacy of the tested individuals, informed consent, just allocation of testing services, and follow-up treatment. Privacy could, as previously described, be safeguarded through sole handling of our device by doctors and health care workers that are already bound by doctor-patient confidentiality. In the future, we plan to ensure the remaining three through the creation of a guide to help individuals understand the need for testing and what our kit entails. While informing our users, we may even provide them with the option to allow for their test results to be included in scientific studies. The guide would also include information on next steps and/or follow-up treatment in case of a positive result.

Through our Human Practices efforts we have gained valuable insights into the views of the public and companies regarding the use and production of the rapid diagnostic devices. Through interviews and discussions, we hoped to learn from their experience and discover which characteristics could improve our testing kit and make it more appealing to future users. The advice we received and integrated included licensing our product to local trusted companies and reducing the time between test and result to less than two hours.

As part of biosafety and security, we worked together with the Dutch National Institute for Public Health and Environment (RIVM) to implement Safe-by-Design (SbD). The RIVM developed this concept to help students assess the risks involved with their projects, even 'beyond the laboratory'. During two coaching sessions with Céline van der Vlugt and meetings our team has had with interested companies, including Goffin Molecular Technologies and DCN Dx, we developed an infographic to visualize the risks that could affect each of our stakeholders.