To expand the accessibility and usability of synthetic biology, new methods need to be introduced to promote the sustainable growth of biological organisms. Cellulose is the most abundant organic compound on the planet (Brigham, 2018); therefore, engineering organisms to be able to grow on cellulose would be very advantageous over using expensive media. Y. lipolytica is a food-safe “non-conventional” yeast that is an up-and-coming chassis in synthetic biology, due to its ability to produce beneficial metabolites and fats (Goncalves et al, 2014).

Many cellulases derived from bacteria and fungi have been deposited to the iGEM registry over the years. However our part collection is the first of its kind in providing cellulases optimized for function in Y. lipolytica. Furthermore, we are introducing amino acid synthesis genes to create auxotrophic and overproducing strains to expand Y. lipolytica's versatility in molecular biology. We are also introducing reporter devices and an antibiotic resistance cassette to increase the usability of this chassis.

Our novel Y. lipolytica collection includes all of our parts which, in tandem with our Y. lipolytica protocols, allow Y. lipolytica to be a more accessible and usable chassis in the iGEM community and beyond.

Allowing for thoughtful and modular assembly

Our collection contains 26 parts, including basic parts that can be used by anyone working with Y. lipolytica, and fully functional protein generator devices containing the cellulase expression cassettes, an antibiotic resistance cassette, and amino acid synthesis cassettes. Our devices also include the gibson homology sequences for the flexible assembly. Overall, we are contributing:


To learn more about each of the parts, check out their registry pages below.

Note: All devices are fully functional expression constructs that can be directly cloned and transformed.

Our parts have been designed for high protein expression and secretion (for the cellulases) in Y. lipolytica, and can even be assembled together to create larger cassettes. The cellulases can be easily purified using the 6X His tag, FLAG tag, or Myc tag (all proteins have one of these tags is present at the N-terminus) if necessary, or the tags can be used for western blot detection. A thrombin cleavage site has also been added between the tags and the coding sequence so the tag can be removed if it interferes with protein function.

Additionally, our Trichoderma reesei EGI and Penicillium funiculosum CBHI have been modified at certain residues based on our modelling for higher efficiency at the pH and temperature optimal for Y. lipolytica growth. You can read more about their design and characterization on the characterization and modelling pages.

Y. lipolytica is known to favour linear DNA integration when attempting to modify its genome. However, transforming a linear piece of DNA presents a challenge as there still needs to be a selection marker present; something that would normally be inherent to a plasmid. Therefore, parts must be attached to a selection marker to easily screen for successful transformants. Flanking restriction sites (NotI) can then be used to linearize the DNA for transformation into Y. lipolytica (figure 1).

Figure 1. Process of integrating a gene of interest in the Yarrowia lipolytica genome as a larger cassette containing an antibiotic resistance gene to select for successful transformants.

For the selection marker to be included in the linearized DNA being transformed, multiple transcriptional units (i.e. the selection marker and the GOI) need to be assembled into one construct. After consultation with Dr. Raymond Turner and PhD student Trevor Randall, we decided to design our parts for Gibson Assembly. Since the selection marker is the common necessity for all parts, we decided to make it a destination vector. Our Nourseothricin Resistance Cassette (BBa_K3629015), when cloned into a plasmid, acts as a destination vector for multiple transcriptional units (i.e devices) to be assembled into. Digestion with SmaI exposes the ends of the Gibson 1 and Gibson 2 homology sequences for the 5' ends to be chewed back by T5 exonuclease, resulting in ~40bp ssDNA regions for incoming parts (with Gibson 1 and 2) to complement/bind to. Once the parts are added and the plasmid is recircularized, NotI can be used to linearize the DNA for transformation into Y. lipolytica (figure 2). We chose nourseothricin resistance as a selection marker by recommendation from Y. lipolytica expert Dr. Rodrigo Ledesma-Amaro , as this antibiotic is relatively cheap, the gene size is small making it easier to order/synthesize, and not many well-characterized auxotrophic Y. lipolytica strains are available yet.

All of our devices include the Gibson 1 and 2 homology sequences. These sequences have been made to have minimal secondary structures when in their ssDNA form after T5 exonuclease digestion. The Nourseothricin cassette is therefore a key component of our collection and can be used as a destination vector for all future teams working with Y. lipolytica parts as long as they have the correct Gibson homology sequences (figure 2).

Since Y. lipolytica primarily accepts foreign DNA through non-homologous end joining, the Nourseothricin Resistance Cassette also contains flanking gPCR primer sites to sequence the surrounding area of the integration site to determine where the DNA inserted in the genome (figure 3).

We recognize however, that specifically-targeted gene integration may be necessary in some cases, and through our discussion with Dr. Rodrigo Ledesma-Amaro we learned that homologous recombination is possible with long (≥1kb) homology regions flanking the insert, which can be further enhanced through the use of Zeta sequencings. Therefore, our Nourseothricin cassette also contains another 2 sets of Gibson homology sequences (named Gibson A/B and Gibson C/D) that can be used (after digestion with HpaI) to add homology sequences after (or before) a fully assembled plasmid is made (figure 3).

Figure 3. Top: Features of Nourseothricin Resistance Cassette (BBa_K3629015) as a destination vector. Bottom: Final assembled plasmid with two GOIs in the destination vector. Gibson A/B and C/D can be exposed to T5 exonuclease activity after digestion with HpaI if genomic homology regions need to be added. gPCR primer binding sites are also highlighted.

For our project, we need multiple genes introduced to the Y. lipolytica genome as a single gene cassette, therefore we wanted to make our parts as modular as possible to allow for different ways of assembly for troubleshooting purposes. Multiple different Gibson homology sequences were built into the parts to allow for the assembly of different plasmids (figure 4). The ends of each Gibson homology sequence can be exposed through the use of specific restriction enzymes (see Appendix) to allow the T5 exonuclease to degrade one of the strands to create the ssDNA homology regions. Check out the registry pages for each of our expression constructs (BBa_K3629012-BBa_K3629018, BBa_K3629023-BBa_K3629026) to see which Gibson sites are built in each construct. Overall, this design allows for easier troubleshooting and provides alternate routes to success when assembling gene cassettes containing multiple transcriptional units.


The parts that have been designed for this kind of modular Gibson Assembly are:<.p>


Furthermore, the following parts have been designed to be assembled with just the Nourseothricin resistance expression construct (BBa_K3629012): 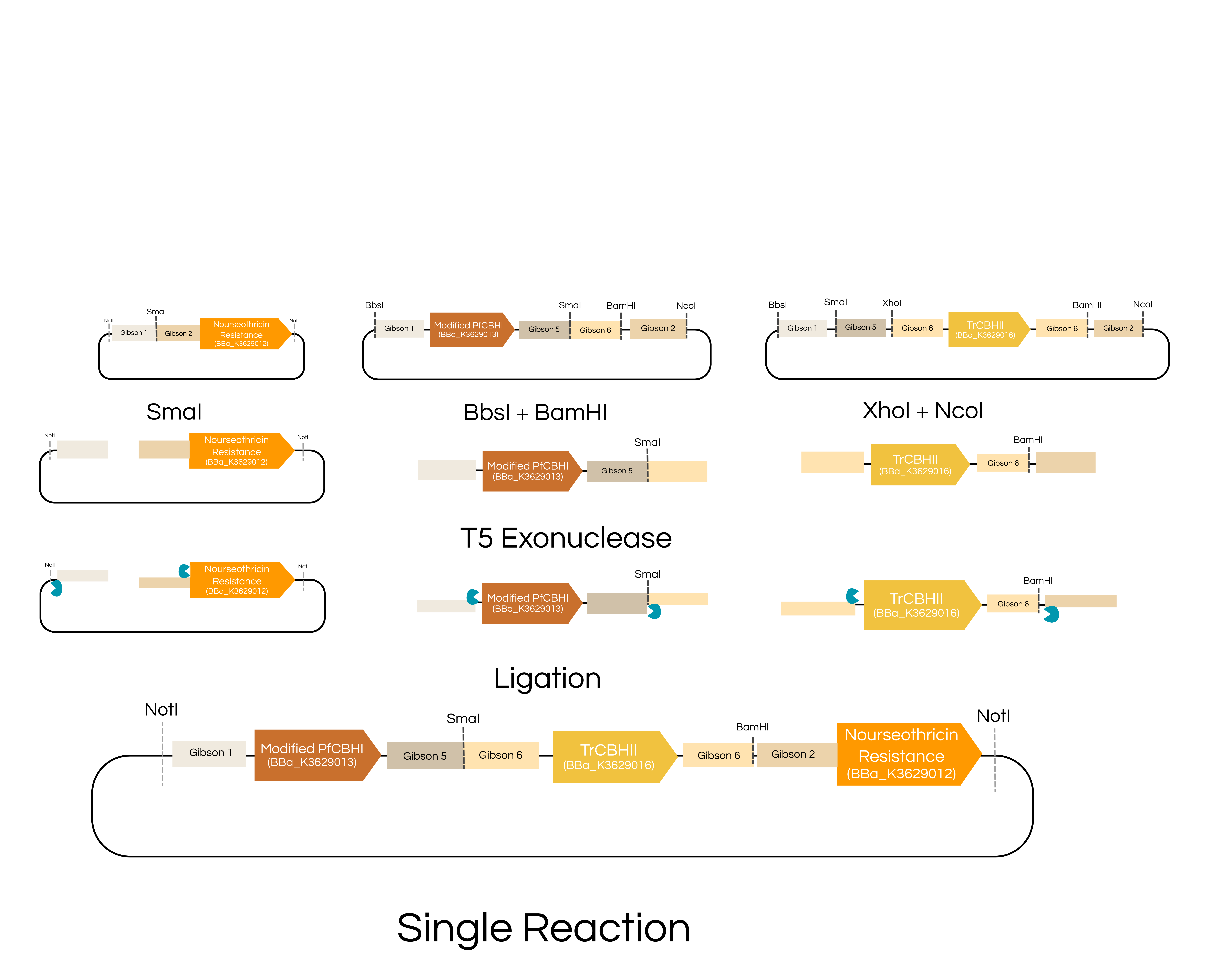 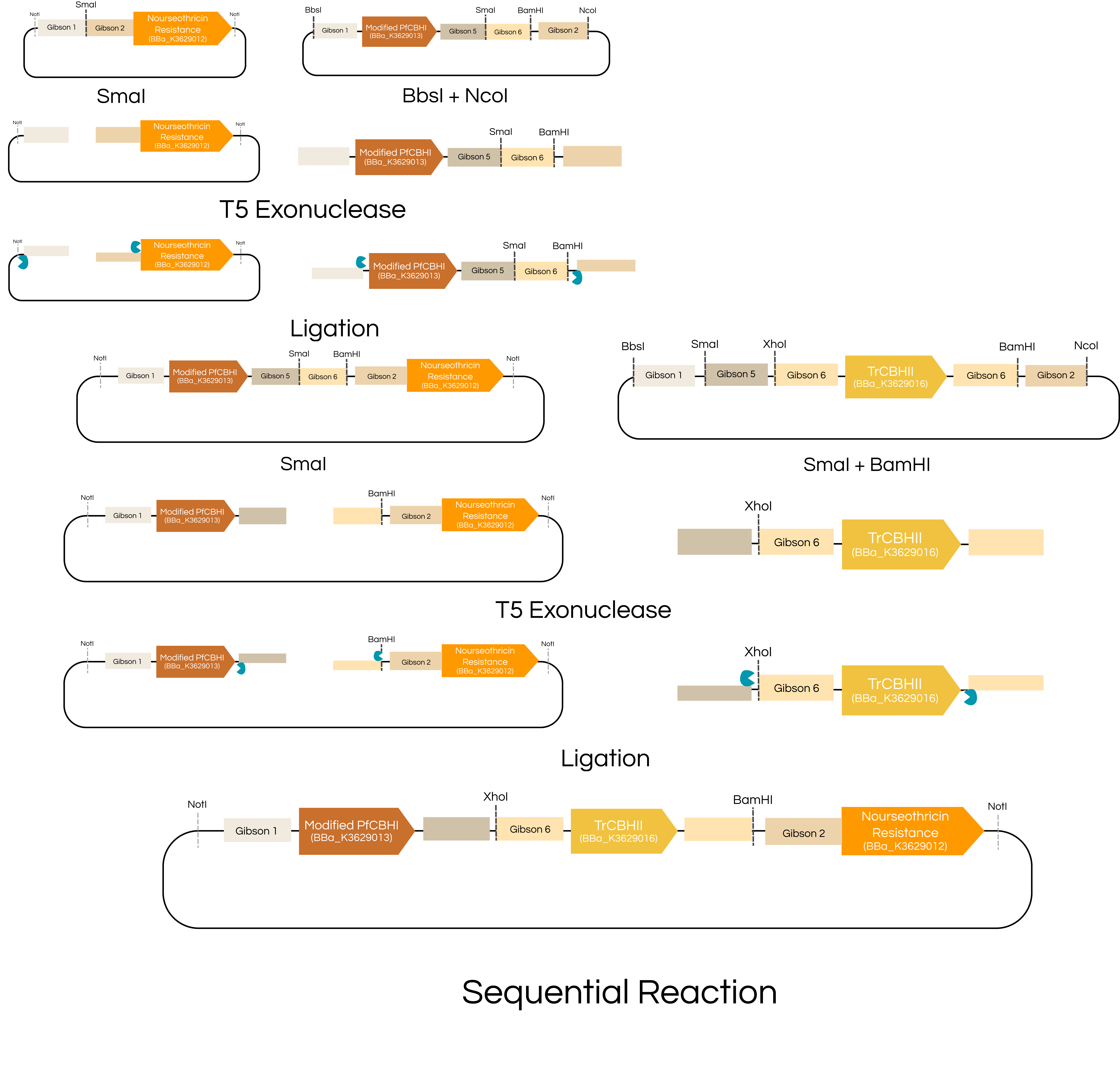 There are 14 different Gibson homology sequences that were used across our parts (BBa_K3629012-BBa_K3629018). Each sequence was design to have minimal secondary structure and optimal GC richness (40-60%).

The Gibson sequences present in each expression construct, and the restriction enzymes required to expose each sequence to T5 exonuclease activity are outlined on each part’s registry page. However, here is a list of the general function of each Gibson homology sequence: